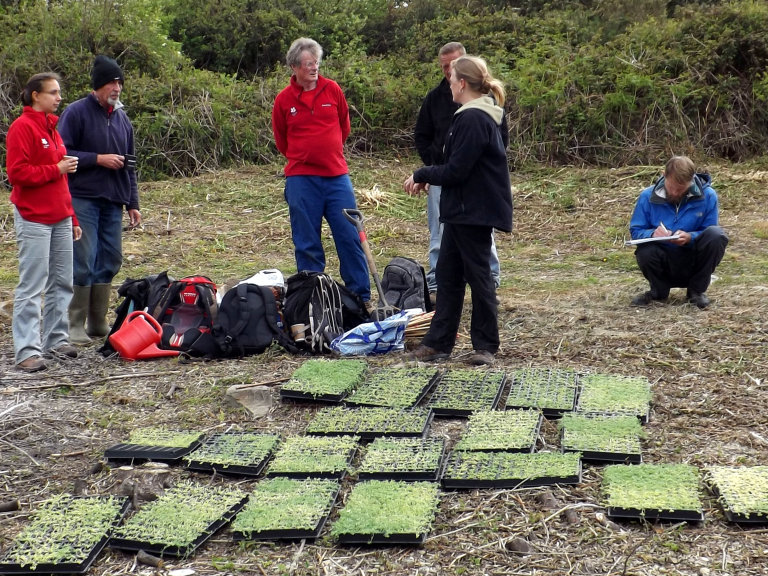 A joint project between the Whitley Wildlife Conservation Trust, based at Paignton Zoo, and the National Trust has culminated in more than 1,500 strapwort plants being brought to the shores of Loe Pool in Cornwall.

The tiny plants were grown by gardens staff at Paignton Zoo using seed from wild plants growing at Slapton Ley in South Devon. Slapton was the only site for strapwort – officially listed as Critically Endangered - in the UK until this Cornish planting.

A team of staff and volunteers from the two organisations combined to undertake the mammoth task. Some plants had already started flowering and were ready to set seed. Since then, seedlings have been spotted.

The new population is being closely monitored to see how well it does and a researcher from the University of Exeter will be on site for much of the summer. Student Alex Millington will be waiting for new seedlings to emerge, the first Cornish strapwort plants for a century.

Strapwort is a small, white flowered plant found on the edge of freshwater lakes and rivers. It needs shores exposed by the drop in summer water levels to grow and set seed for the following year. It produces tiny seeds that are spread by water and possibly the feet of birds. As a single population at Slapton (a site owned by WWCT) it is at high risk of extinction, so Natural England funded a study to look at other potential sites.

Tracey Hamston, from WWCT, said: “We looked at several locations, but the National Trust site of Loe Pool was always the most likely as it had historic links with strapwort. It was recorded as being prolific there in the late 1800s before declining and disappearing in the early 1900s. Conditions in the pool have improved over the last 15 years so reintroduction is now possible. From research carried out by WWCT on the Slapton Ley population we know what management is needed to sustain the plants.”

The National Trust was also keen to see it growing there once again. Laura Bailey, the National Trust ranger for Loe Pool, has been preparing the site with volunteers by clearing some scrub to create the open conditions it needs.

Paignton Zoo Environmental Park is a registered charity. For more information go to www.paigntonzoo.org.uk or ring 0844 474 2222.