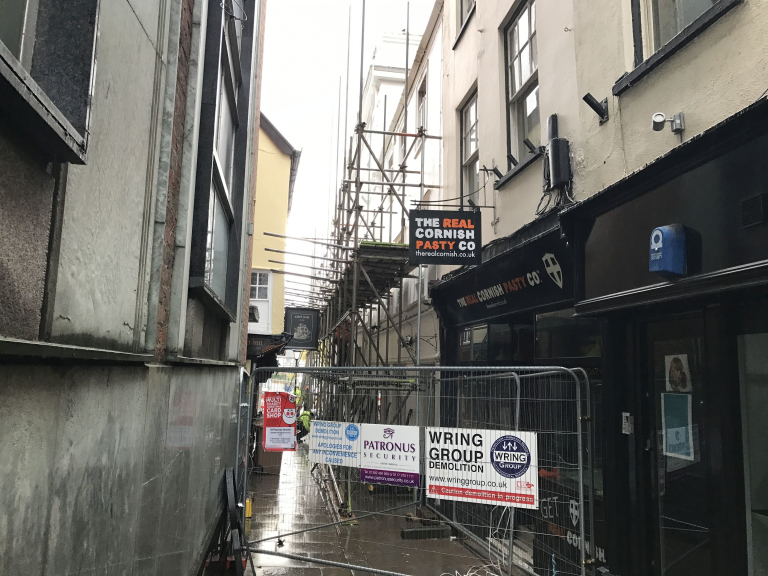 Work is being carried out to open up Martin’s Lane in Exeter following last month’s city centre fire. Christmas lights are also being installed outside shops in and around Cathedral Yard by the Business Improvement District (BID).

Contractors are looking to get the Lane, back in use by the end of play on Monday as well as removing the cordon at the bottom end of Catherine Street. Scaffolding is being erected to allow businesses to safely access their premises and shoppers to use the Lane. Inclement weather and other unforeseen circumstances may delay the process but the City Council has pledged to keep people up to speed with the works as they happen.

Cllr Rosie Denham, Lead Councillor for Economy and Culture said: “This is another important step in getting the city back on its feet following the devastating fire. A number of businesses that have been unable to access their premises in St Martin’s Lane will shortly be allowed back in again.

“Obviously these shops will need to undertake a fair amount of clearing up before they can open to the public but things are moving in the right direction. The good news is that people will soon be able to use that lane again and with the Christmas Market about to open, that’s another big positive.”

The team at the Business Improvement District (BID) is currently installing Christmas lights on lamp posts around Cathedral Green. The delay in getting these up has been as a result of the fire. The lights should be up and working by the end of next week. The team is also looking at the feasibility of putting Christmas lights down Martin’s Lane.