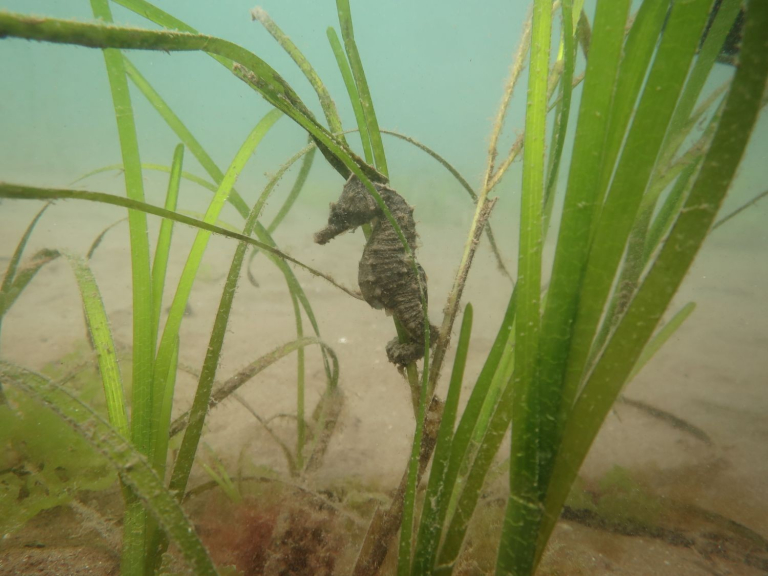 Out of sight of guests, staff at Living Coasts are working on a key project to propagate the seagrass species Zostera marina. The long-term aim is to find ways of growing it on a large-enough scale to make planting out areas of suitable seabed viable. They have successfully grown some seagrass plants from seed; it’s a significant achievement, as the seeds are notoriously tricky to germinate.

Before we go any further, there’s a question that needs asking. What exactly IS seagrass, anyway? Seagrass is a flowering plant that forms dense underwater beds in shallow water. It’s both a species and a habitat. Distinct from seaweed, seagrass provides shelter and food for a large range of animals, including fish, marine mammals and birds. Found in the shallow waters of coastal regions on every continent except Antarctica, it’s declining globally at a rate of about 2% a year.

Seagrass evolved about 100 million years ago and – unusually - can flower underwater; seagrass meadows are highly diverse and productive ecosystems. They are often called the "lungs of the sea" because they generate oxygen through photosynthesis. They are also beautiful. Zostera marina flowers in August and September.

Tor Bay has beds and meadows of seagrass; for most local people, they are out of sight, out of mind. The Zostera marina seagrass is protected by the UK Wildlife and Countryside Act of 2008. Some of the Bay’s seagrass seems healthy and full of life, but some is damaged and needs to be nurtured back to health.

The Torbay Marine Conservation Zone helps. Designated in 2013, the MCZ is an inshore site running from Oddicombe Beach to Sharkham Point, protecting an area of approximately 20 square kilometres. Beginning at the shore, the boundary extends between 1 to 2.5km out to sea and includes Hope’s Nose and Berry Head.

Living Coasts has a record of working with seagrass. The coastal zoo and aquarium was part of the Community Seagrass Initiative, a citizen science project led by the National Marine Aquarium in Plymouth that ran between 2015 and 2017. The lasting achievement of CSI was toraise awareness of seagrass habitats in the South West of England. It also built up a bank of volunteer divers keen to help with further surveys; others involved now are Living Coasts volunteer divers.

Kew Gardens and NMA are also involved in seagrass propagation, with Kew trying different species, though currently with less success than Living Coasts. Curator of Living Coasts Clare Rugg: “Other people have tried to grow Zostera marina, but have not done so well. Seagrass is hard to grow as there are so many variables under the sea!”

Seagrass is threatened by coastal development, irresponsible anchoring, dredging and other activities that disturb the seabed, including certain fishing methods. Seagrass beds are also at risk from pollution and increased amounts of sediment in the water, which block sunlight and prevent growth. If the seagrass beds disappear, the seahorses that live among them will disappear, too.

You can see seahorses in the aquarium at Living Coasts; both the big-bellied and the native short-snouted. To confuse matters, the seagrass waving gently in their tanks is artificial. The important stuff is out of sight, but definitely not out of mind.