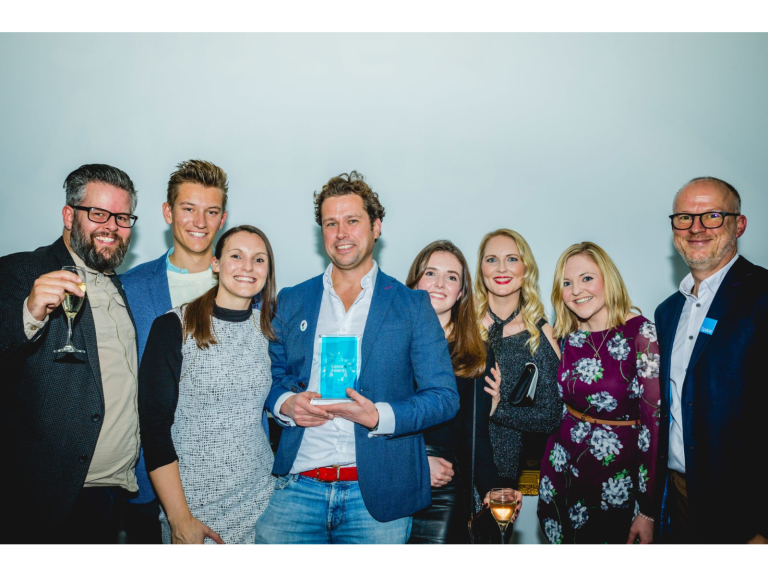 Lightfoot, the first connected car technology company to reward better drivers, has been given another reason to celebrate in a month of good news for the Chudleigh-based business. Fresh off the back of their Made in the South West Awards win and the announcement of a £3.2m investment deal from BGF that has also seen ex-CEO of Dyson, Martin McCourt, join the board, Lightfoot has been awarded the title of Best Workspace in the Greater Exeter area.

Organised by Exeter-based workplace designers Space, and backed by Exeter City Council and Exeter Chamber, the Space Awards celebrate innovative, well-designed, happy workspaces in the Exeter area. The criteria for the Best Workspace category were broad, but looked for “organisations with a fantastic overall workspace – well thought through, innovative use of space, happy employees and all-round great place to work.” Lightfoot came out on top of a six-strong shortlist to win the award.

“The judging of this award was really tough and there was some great competition. It eventually came down to people not property. Lightfoot has a fantastic, engaged and excited team. It must be a pleasure to work in this environment. Our purpose is to create engaging, people-focused workplaces, which reaps dividends for companies. Lightfoot embodies that.”

The award comes roughly half a year after Lightfoot relocated to their new headquarters of ‘Innovation Valley’, along with sister company Ashwoods Electric Motors. The team designed and built the space from scratch themselves, making the award especially meaningful. Full of personality and quirky features, including an antique revolving door from a grand hotel as the entrance to their boardroom and a clever design scheme that mimics a natural landscape, the workspace at Harcombe Cross, on the A38 near Chudleigh, is fast becoming a landmark.

Awarded in recognition of its unique and inspiring workspace, as well as the environment and staff culture that it has helped create, founder and CEO of Lightfoot Mark Roberts was delighted with the accolade, commenting:

“Moving to Innovation Valley was a landmark moment that has pushed us on to an exceptionally strong second half of 2018. We’re finishing the year having gained serious financial and industry backing, moved to a new, state-of-the-art home, and won two awards celebrating what we’re all about – being a pioneer that disrupts traditional models of technology and work. I’m so proud to see the company succeeding like this and we look forward to continuing in the same vein in 2019.”

Created to help drivers “earn, win, and save” through smoother driving, Lightfoot, which reduces fuel bills and emissions by up to 20%, incentivises a more efficient driving style with perks estimated to be worth over £750 in earnings and savings per year.

Combined with weekly prize and cash giveaways, such as their WIN250 League, Lightfoot is attempting to make smooth driving the new norm by giving it a ‘real world’ value. Benefits for Lightfoot’s community of safer drivers include discounts on everything from weekly food shops and cinema trips, to flights and the latest tech. Competition winners have an open invitation to visit Innovation Valley, and Lightfoot has welcomed several of them in recent weeks to celebrate their wins.

Lightfoot’s technology was launched to consumers in September 2018 after several years of exponential growth in the fleet sector. Customers including Virgin Media, Dyno Rod, and Greencore have deployed Lightfoot’s driver rewards system to reduce fleet costs, carbon emissions, and accidents on the road to great success.

Lightfoot’s devices are for sale at an introductory price of £99 and are stocked in Halfords stores in Exeter (Rydon Lane Retail Park), Plymouth (Marsh Mills Retail Park), and Yeovil (Houndstone Retail Park). They also come with a month’s free subscription, worth £3.99, which unlocks more than 100 discounts on major national brands including adidas, Nike, Vue, ODEON, Sainsbury’s, Tesco, Moss Bros, GAP, Ray-Ban, EE, Halfords, B&Q, Las Iguanas, and Bill’s. As Lightfoot becomes stocked in further Halfords stores, the device will cost £149, with a fitting fee of £30 and a monthly subscription of £3.99.

To find out more, or to purchase online, visit www.lightfoot.co.uk.