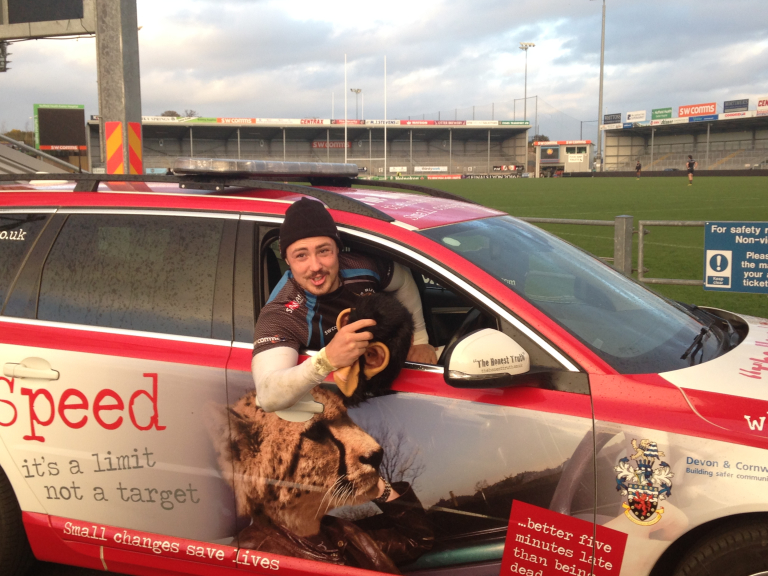 It was originally conceived in 2009 following a fatal collision in South Devon that claimed the lives of three young people and which had a devastating affect on the local community.

Jack Nowell said: “I am delighted to be supporting the Honest Truth.  A serious traffic collision can ruin so many lives in just a matter of seconds that it is important to get the message out there about being safe on our roads. I am looking forward to working with the emergency services and helping promote the work this initiative does.”

Rob Carlson, from Devon & Somerset Fire & Rescue Service has been involved with the Honest Truth from the start, said: “We are delighted to be working in Partnership with Jack Nowell and Exeter Chiefs to promote safer driving to the wider community of Devon and Somerset to help make our roads a safer place.

“The Honest Truth predominantly targets young drivers and passengers; as they represent a high proportion of the killed and seriously injured collisions on our roads. Therefore it’s fantastic that we have the support of Jack as he is someone who young people will admire and respect.”

The number of partnerships that are delivering The Honest Truth nationally continues to rise with more than1500 advanced driving instructors now signed up to delivering the life-saving messages.

In addition, the project has diversified massively and is beginning to get its life-saving messages out through new partnerships with fleet trainers, Royal Air Force and National Police Cadets all involved.

Supt Jim Nye said: “I am absolutely delighted that Jack Nowell has agreed to become one of the Honest Truth’s patrons. This has become a nationally recognised initiative and it is great it is now supported by someone who so many youngsters recognise and admire. We are really looking forward to working with Jack.”

Interest in The Honest Truth has been shown now from 12 European countries and a further 10 road safety partnerships across the UK.

For more details about the Honest Truth visit http://www.thehonesttruth.co.uk/