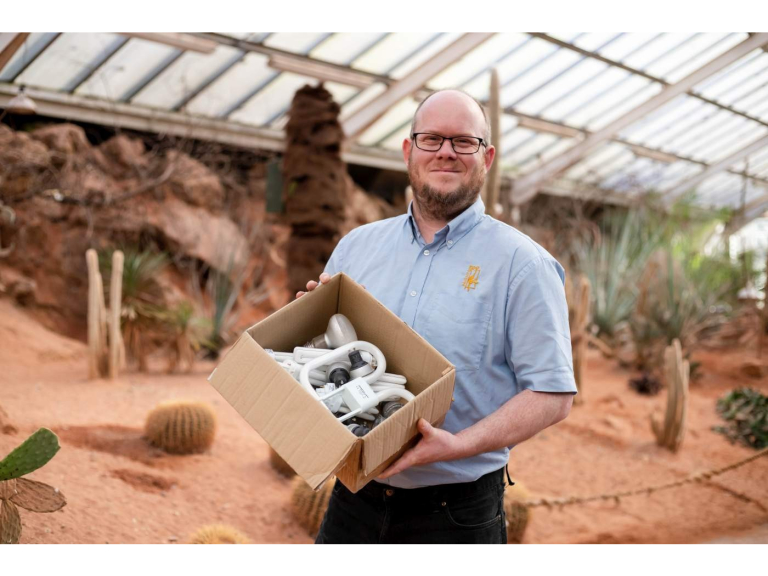 How many people does it take to change 400 light bulbs? One - Pete Morgan.

Pete is the Environmental Officer for the Whitley Wildlife Conservation Trust, the charity that runs Paignton Zoo Environmental Park, Living Coasts in Torquay and Newquay Zoo in Cornwall.

He’s busy overseeing a green revolution to save energy and save money. The charity is installing environmentally-friendly lighting in key buildings, with halogen and compact fluorescent lamps being replaced by high-efficiency LED lights.

Dozens of public buildings at all three zoos in the charity group have been upgraded, including shops and cafes. Over 200 bulbs have been changed in Paignton Zoo’s restaurant alone.

Peter said: “It’s been an investment but one we felt, as an environmental charity, we wanted to make – and it will pay for itself. Halogen bulbs were hugely wasteful and typically failed after about two years, while LEDs should last for around 15 to 20 years on the same usage. We will see cheaper running costs, lower maintenance costs - and a nicer light.”

Legislation has phased out much of our older, energy-hungry lighting, including halogens bulbs. Traditional incandescent bulbs were barred in 2009 and in 2016 the gradual removal of halogens started as the EU led efforts to improve energy efficiency and cut carbon emissions.

Recently, sales of halogen and compact fluorescent lamps have been banned across Europe with the aim of boosting super-efficient LED lighting technology. Paignton Zoo Environmental Parkis a registered charity. For more information go to www.paigntonzoo.org.uk or ring 01803 697500.