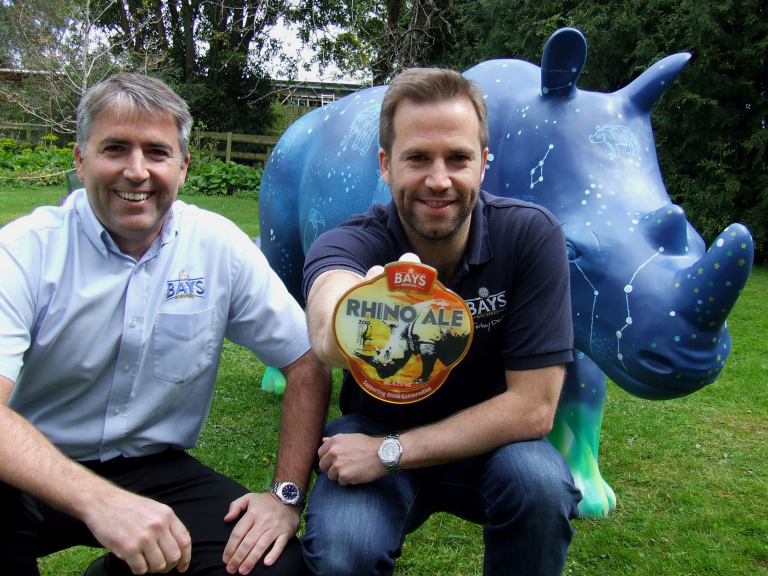 “We produced a special ale for The Great Gorillas Project in 2013, one for rhinos in 2014 and then giraffes in 2015. They were all successful, so now we’re doing another – and this time we return to the rhinos, a species that undoubtedly needs the funds.”

Paignton Zoo’s Pippa Craddock added: “We hope people will raise a glass for rhino conservation and drink a toast to the launch of the Great Big Rhino Trail at the end of July.” The 4.7% ale uses hops from Tucker’s Maltings. Bays will donate 10p per pint and 10p per bottle, while Wetherspoon’s will give £10 per cask (which works out at roughly 13p per pint).

The Great Big Rhino Project is putting a free public art trail of 40 painted life-size rhinos around the streets, parks and open spaces of Exeter and the English Riviera, creating a spectacle that thousands of people will enjoy.

The Great Big Rhinos will come alive on Saturday 30th July 2016. Money raised will be channelled through Save the Rhino International and into Javan and Sumatran rhino conservation.

Rhinos have been around for 40 million years. There are five species: black, white, greater one-horned, Javan and Sumatran. All of these are threatened with extinction – three are Critically Endangered as defined by the IUCN (World Conservation Union). This means that they will not survive without massive and urgent action.