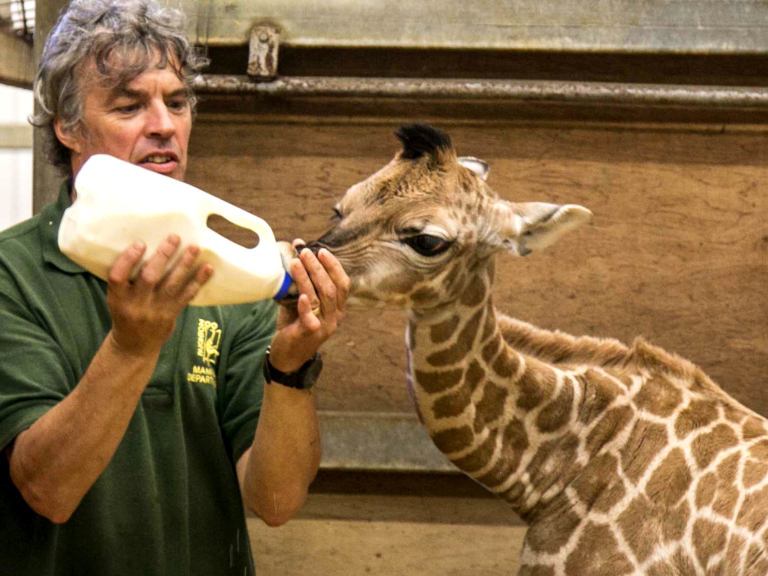 Senior Keeper Craig Gilchrist said: “He has taken milk from us, he is getting the hang of it. Mammal keepers Helen Neighbour and Jim Dicks are doing the feeding. He is separated from the group but can see them all, for the first few days it is important to keep him separate to allow him to bond with the keepers so he feels comfortable enough to feed from them. As soon as possible he will be reintroduced to the herd so he doesn’t forget he is a giraffe!”

Paignton Zoo Curator of Mammals Neil Bemment added: “At this stage we don’t know why Janica has rejected her. Giraffe mothers are fickle beasts. Sometimes they will rear their calves, sometimes they won’t. For example, Janica reared her first, Tonda, who is now the breeding bull at Chessington Zoo, Surrey, but declined to rear her second Valentino, who was successfully hand reared by the keepers, reintroduced to the family group and is now in Port Lympne Zoo, Kent.”

Paignton Zoo - a registered charity – is going to get through a lot of milk over the next few months. Craig again: “At the moment we need about 4 to 6 litres of gold top milk each day. He will take in around 10% of his body weight in milk each day and gain weight just as quickly. As he grows, so will his milk requirements.”

Hand rearing a giraffe is a lot of extra work and commitment for the keepers. “He is fed 4 times a day and could need milk for up to 9 months. We will start weaning him when he is around 5 to 6 months, depending on how he gets on.”

The calf stands at nearly six feet tall at birth. The gestation period for a giraffe is between 400 and 460 days. The mother gives birth standing up – the fall breaks the umbilical cord. The calf can stand and run within a few hours.

Father Yoda came from Givskud Zoo, Denmark, where he was born on 14th November 2004. He arrived in Devon in September 2006. Janica came to Paignton Zoo from Duvr Kralove Zoo in the Czech Republic.

The Zoo’s other adult female is Sangha, who came from Liberec Zoo, also in the Czech Republic. The other youngsters at the Zoo are Otilie, who was born in September 2012, and Joanna, born in January 2014, both to mother Sangha, and Eliska, born in January last year to Janica.

They are all Rothschild's (Baringo) giraffes. Rothschild's giraffes are classified as Endangered – there is a European Endangered species Programme for the species. Paignton Zoo Environmental Park is a registered charity. For more information go to www.paigntonzoo.org.uk or ring 0844 474 2222.