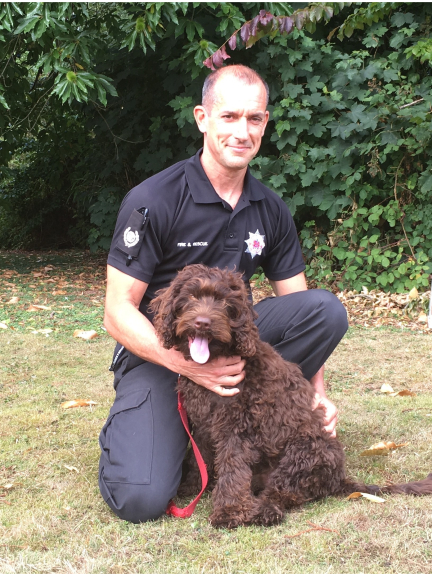 Introducing Digby a four month old Australian Labradoodle and for Devon & Somerset Fire & Rescue Service one of their latest recruits. At the moment Digby is busy completing his socialisation training, and when he reaches eight months old and has been fully assessed by Pets as Therapy (PAT) he will become a Therapy K9.

The assessment is all about him having the right personality and confidence around people, particularly young people. So he needs to be a friendly sociable dog that is happy in large groups as Digby will also provide contact with vulnerable people in schools, hospices and hospitals for the charity, Pets as Therapy (PAT).

Digby will also be available to Devon & Somerset Fire & Rescue Service supporting Critical Incident Defusing alongside his handler Operational Licence & Training Delivery Manager, Matt Goodman when he is assisting a crew who have returned from a traumatic incident. The fire crew will have the option for Digby to attend the Defusing session.

As part of his training, Digby has already attended his first Defusing session in July following a serious Road Traffic Collision on the A35 near Honiton. Matt explained: “The crews immediately responded to Digby when he arrived at the fire station which provided a positive focus both before and during the Defusing session. The value he added was tangible.

“The use of Therapy Dogs has been scientifically proven to help people who have been exposed to traumatic situations or who are dealing with very challenging situations in their lives such as ill health or learning ability.”

The Fire and Rescue sector makes good use of canines as Arson dogs or Live Scent rescue dogs for example, but from his research Matt believes that Digby would be the first therapy dog to support firefighters during the defusing process.

Australian Labradoodles are also specifically bred for their hypoallergenic fleece which is very soft and less likely to cause an allergic reaction.

Digby is on trial at the moment with the Fire Service, and on a day to day basis is 100% Matt’s responsibility, and operates under Matt’s risk assessment when attending a defusing session.

Post-traumatic stress disorder is an anxiety disorder caused by very stressful, frightening or distressing events. Someone with PTSD often relives the traumatic event through nightmares and flashbacks, and may experience feelings of isolation, irritability and guilt.

A Post-traumatic stress disorder study compared days lost from stress related illness following the Cumbrian Shootings in 2013 and the M5 J25 RTC in 2011. Study revealed that of 717 Police Officers involved in the Cumbrian incident, 26% took sickness absence due to the associated effects of psychological illness as opposed to 2.4% for the M5 incident when comparing the 161 DSFRS personnel who responded initially (who were Defused within 13 hours after the incident occurring). No day’s sickness were taken for 2 months following the incident, 33 days were taken subsequently.