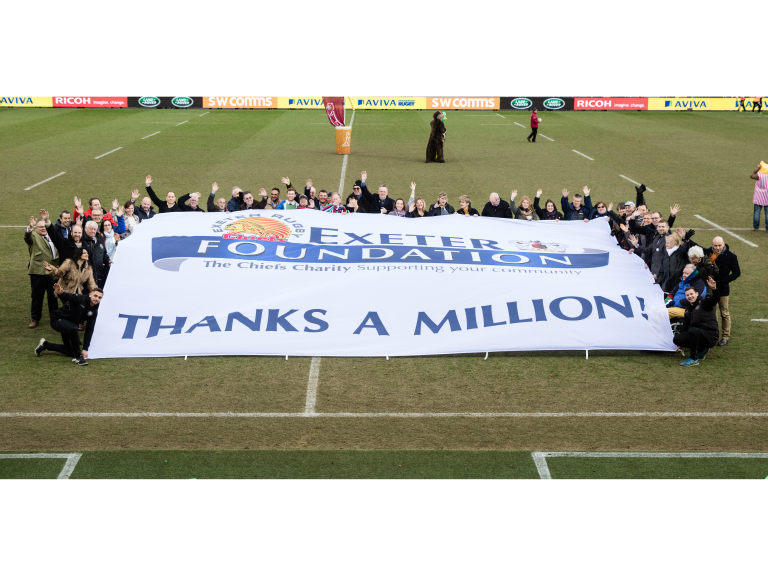 A charity set up just six years ago to help promote the local community and the vision of people who and work there is today celebrating raising the sum of £1m.

Put together back in 2011 by three rugby directors and three local businessmen, the Exeter Foundation is a city-based charity that has been working tirelessly to bring future prosperity to the people in and around the Devon city.

And since its inception the Exeter Foundation has helped to directly fund over 75 different charities and organisations in a series of wide-ranging projects and schemes.

From match-day collections at Exeter Chiefs Rugby Club through to Big Walks, Cycle Challenges, Charity Dinners and varying events devised by members of the Foundation XV, it has resulted in the £1m milestone being reached.

Not that the hard work stops here – already plans are afoot to target doubling this figure with even more fundraising exploits – all of which will continue to help the many charities and organisations in and around Exeter.

“To reach the £1m milestone is a huge achievement for the Exeter Foundation,” said Tony Rowe. “However, the hard work doesn’t stop here. As a board of trustees we are fully committed to continuing the excellent fundraising work that has so far been done.

“We have been lucky to see first-hand just what a difference even the smallest sum of money can make to so many people locally. Helping to improve the lives of Exeter people is our number one priority and we are delighted with the response the public have given to the Exeter Foundation over the years.

“Just dropping a pound into a bucket or sponsoring someone to ride a bike, it can make a real difference in the long run. Also, we have to thank the many people who have taken on the numerous fundraising challenges, sometimes in the very worse conditions. Without that kind of support locally we would not have hit the £1m figure, so to everyone we are eternally grateful for all of their efforts.”

Funding over the years through the Exeter Foundation has to date helped to purchase eight different vehicles, including a boat, six different play parks for children with special needs, an outdoor learning centre, an IT hub, specialist equipment for projects around the city, wheelchairs for the Exeter Hawks Wheelchair Rugby team, buddy chairs for Bolham Ward at the Royal Devon & Exeter Hospital and the refurbishing of two separate hydrotherapy pools.

“Our aim is to create a lasting legacy for everyone that we help,” added Tony Rowe. “Each year the Exeter Foundation continues to grow and it is all down to the support we receive from the public. Without their support we would not be able to provide the role we do, so again I thank everyone for their efforts and look forward to an even bigger and brighter future.”

To find out more about the Exeter Foundation and the work it does locally, visit www.exeterfoundation.org.uk