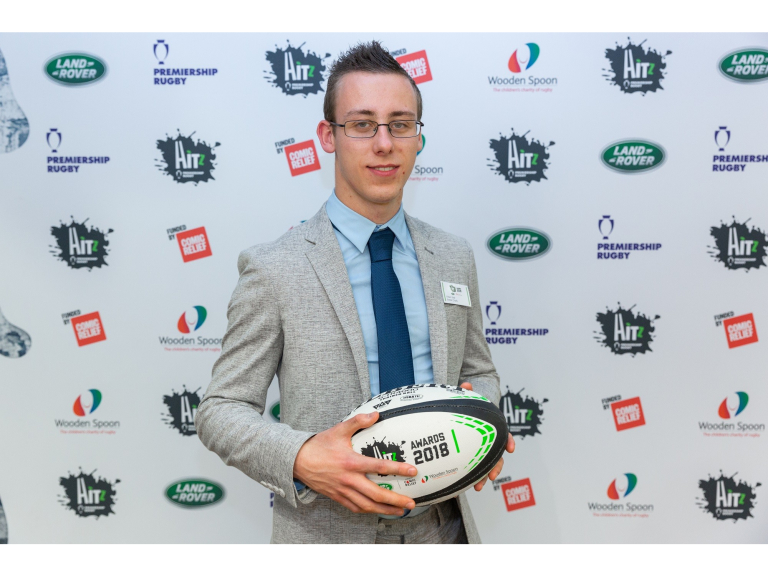 Exeter Chief’s HITZ participant Aidan Seal has been presented with the Academic Achiever Award at the star-studded 2018 HITZ Awards, as he works towards his goal of joining the Navy.

HITZ, which is celebrating its tenth anniversary, is Premiership Rugby’s award-winning education and employability programme which, with the help of its funders Land Rover, Wooden Spoon and Comic Relief, works with more than 2,000 14-18 year olds across England every year, and is delivered nationally by England’s 13 professional member rugby clubs.

And to celebrate the hard work of those involved in the programme, a star-studded HITZ Awards took place at the BT Centre, with the likes of former World Cup winner Maggie Alphonsi and current Leicester Tigers prop Ellis Genge in attendance.

Four awards were handed out on the night and Aidan, whose award was supported by Premiership Rugby, was recognised for his outstanding progression in communication skills and commitment to education.

Aidan left school with no qualifications but with the help of HITZ he’s achieved a BTEC Level 2 in Sport, Functional Skills in Maths and English, joined a rugby club, and is awaiting test results to join the Navy.

“It just feels so great to have won an award,” said Aidan, who is also now employed and has passed his driving test. “I really don’t know what to say!

“I’m so surprised to have won because I maybe didn’t have the confidence in myself before, but I’ve been on such a journey since then.

“The lessons on the HITZ programme were good because they were made practical for you, rather than doing things with pen and paper, practically is the only way I learn.

“I struggle when it’s on paper so HITZ was great for me, the tutoring is the best I’ve ever had.”

Using rugby’s core values of teamwork, respect, enjoyment, discipline and sportsmanship, HITZ increases young people’s resilience, self-reliance and confidence and gives them the necessary personal, life and employability skills to get back into education, training, apprenticeships and employment.

Tigers prop Genge handed Aidan the Academic Achiever Award and said: “I think it’s good that all of these people have been recognised for what they do.

“I’m sure that these guys will remember this for a long time – it’s nice to be recognised for how well you’re doing.

“It spurs you on to achieve more, I’ve met some great characters around tonight.

“Personally I didn’t like school, I left school in year nine and I’m sure some of these kids have had similar things and the HITZ programme has helped them get back on track, whether it be BTECs or doing GCSEs again.

“Rugby in that sense, when you get put into that team environment you appreciate what everyone else is going through, everyone’s got struggles and different times they’re going through and this programme has done a lot for them, it’s great to see.”