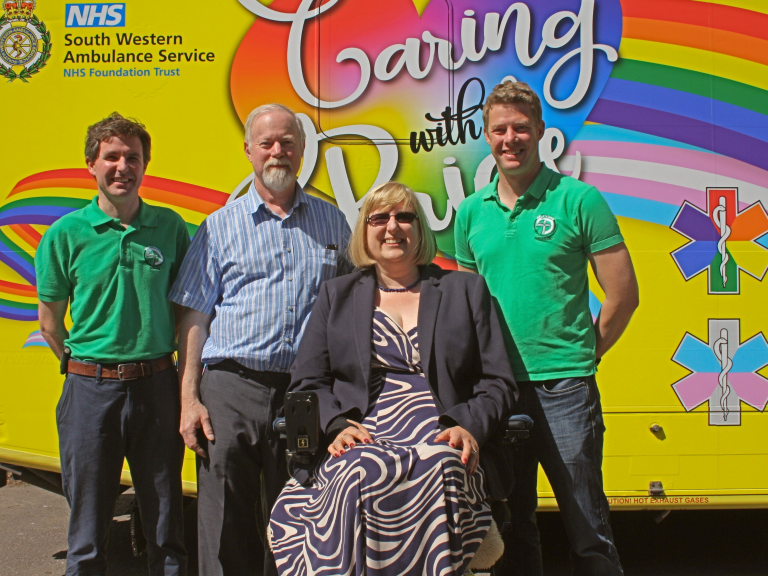 Gillian Kirkman, 54, had a sudden cardiac arrest at home near Bovey Tracey, Devon in October 2018.

Her ex-paramedic husband, Iain, gave his wife chest compressions to give her a fighting chance of survival.

Three BASICS (British Association for Immediate Care Schemes) Devon Doctors responded to an automated pager message about the incident within six minutes. They used a defibrillator to get her heart beating again.

After a period of stabilisation, SWASFT Paramedics and one of the BASICS Doctors transported Gillian by ambulance to Torbay Hospital.

She has gone on to make a fantastic recovery, and was given an internal pacemaker to prevent it happening again.

Gillian, who has no memory of the incident, made a special visit to a SWASFT base in Exeter on 14 May to meet some of those who responded to the emergency.

She said: "I’m incredibly lucky to be alive. Everyone played their part, including the call handler who ensured I had the right response, and the volunteer doctors who were able to arrive so quickly.

“My family and I can never thank everyone involved enough for saving my life and giving us precious time together.”

Before her cardiac arrest, Gillian had been diagnosed with an abnormal heart rhythm and was awaiting a consultation.

Gillian said: “We were watching a film after a day out, and it was the last thing any of us were expecting to happen.”

Two adults with learning difficulties, who live with Gillian and Iain, made the 999 call.

Iain added: “I went into resus mode. It was only afterwards that I thought – what if?”

Gillian said: “My husband’s CPR was so effective he cracked several of my ribs and my sternum!

“Although I had the physical trauma, I wasn’t aware of it happening at the time.

“Having been a call taker myself, it’s strange being on the other side. I’ve been in the control room when that kind of call comes in, and it does change the atmosphere.

“I would encourage anyone to learn to do CPR. If you don’t do anything, the person will die. So it can make all the difference.”

Due to an electrical problem, Gillian’s heart is still unable to pump blood around her body as it should do. But her pacemaker controls her heartbeat, and can administer a shock if her heart beats too quickly.

She added: “Although I am restricted in what I can do now, I’m trying to make the most of life, and am enjoying being back at work.”

BASICS Devon Doctors Simon Scott-Hayward, Lauren Weeks, and Nick Ratcliff were diverted from a training exercise with Dartmoor Search and Rescue at Haytor to attend the incident.

Dr Scott-Hayward, who is also SWASFT Primary Care Medical Director, said: “This is a fantastic example of the cardiac arrest chain of survival. That includes excellent and immediate bystander CPR, rapid arrival of a defibrillator, along with stabilisation before transport to hospital.”

A South Western Ambulance Service spokesman added: “Gillian is living proof that can people and do survive cardiac arrests, if they are given the right treatment at the right time.

“SWASFT is enormously grateful for the support provided by all our BASICS volunteers.”

If you suspect someone is having a heart attack or cardiac arrest: call 999 immediately, begin CPR, and use a public access defibrillator if one is available.