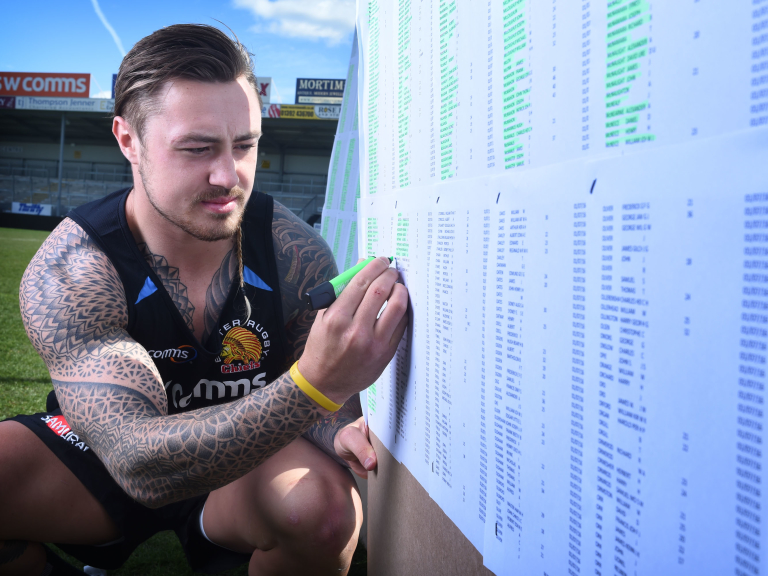 Yesterday, at the county ground, (28th April) he crossed his own relative’s name off the list of the fallen, after symbolically reading his name out loud - both as Frances Nowell and the family nickname of ‘Uncle Frank’.

The 19240 Shrouds of the Somme project aims to remember all 19,240 allied soldiers who died on 1st July 1916. Artist Rob Heard has created hand-stitched, shrouded figurines to represent every one of them and the installation will be unveiled on July 1st.

Cornishman Jack discovered that his great, great Uncle Frank was among them at a charity dinner at the Exeter Chiefs’ ground to raise money for the project. His father, Newlyn trawlerman Mike Nowell, knew that Francis Nowell had fought and died at the Somme because the Nowell family visit the war memorial where he is listed every year.

What they didn’t know was that he was one of the 19240 who died on the first day.

Only after checking the boards of lists which were brought to the dinner did they discover that Francis Nowell was one of the men who fought and died on the first day of the battle of the Somme.

“It all came as a bit of a surprise really,” said Jack. “It wasn’t until I attended the recent 19240 Shrouds of the Somme Dinner here at the club that I found out the history of it all.

“I know there is a memorial back in Newlyn that lists the name of my great, great uncle, but now hearing what happened during the battle and that one of my only relatives was involved, it really did bring it home to me what happened all those years ago.”

Committee member Mel Bradley MBE from the 19240 Shrouds of the Somme explained the astonishing coincidence at the dinner where Jack had donated a signed shirt for the auction:

“I asked Jack’s dad if he knew if Frank was one of the 19240 who died on the first day,” she explained. “He thought it possible so I checked the boards of names which were behind him and Francis Nowell was on the last board. Rob only bought the first 6 of10 boards. Francis’ name was just below the green lines where Rob had got to in making the shrouds.  So I got Jack’s dad and showed him – he was quite touched.”

Frances Nowell served in the West Yorkshire Regiment and died on the 1st July 2016 on the first day of the Battle of the Somme.

The 19240 Shrouds of the Somme project will be unveiled in Exeter’s Northernhay Gardens on July 1st this year at 7:30am.  It not only aims to provide a powerful visual depiction of the vast loss of life but schools across the UK are invited to get involved in their education project.

They are also asking the public to help by using the power of the internet to create the biggest database of the fallen on that day that has ever existed.

“We believe that in this age of digital technology we have a chance like never before of building up a comprehensive portfolio of information about the soldiers who gave their lives on that tragic day,” says artist Rob Heard who came up with the project.

“We want schools, communities, families and individuals to get involved and let us know if they have any information about anyone, a friend, relative, neighbour or member of their community.

Photos, stories, memories and any further information that we can use to build up a picture of them to remember who they were instead of just a name on a list will help to commemorate them properly and help future generations understand the real human cost of war.”

For more information visit the project website on www.thesomme19240.co.uk