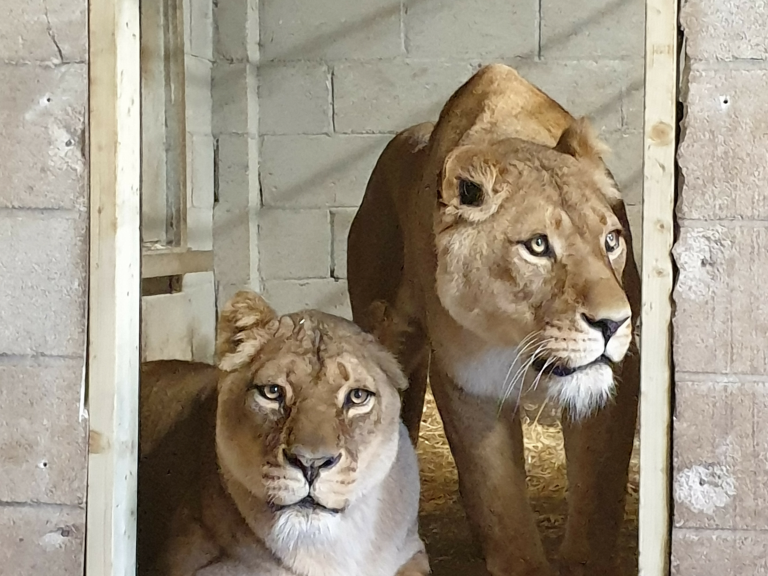 Family attraction, Dartmoor Zoo, has welcomed two lionesses from Longleat Safari Park. Ten-year-old sisters, Kimya and Nikita, were introduced to Dartmoor Zoo on 26th March after travelling from Longleat in Wiltshire, where they have lived since 2011, after being introduced from Blackpool Zoo.

In the wild, the population of African Lions has decreased by 43%* in 21 years, and they were declared ‘vulnerable’ in 1996 by the International Union for Conservation of Nature.

The public will soon be able to see the stunning big cats at the Plymouth based zoo, once keepers are comfortable with how the lionesses have acclimatised to their new surroundings.

Dartmoor Zoo’s Curator commented: “We’re delighted with how the two lionesses are settling in so far, and are looking forward to slowly introducing them to our male African lion Jasiri in the future. At this stage, Kimya and Nikita are getting to know their new home and acclimatising to the new surroundings. Jasiri’s enclosure is next door which allows them to see, hear and smell each other. The keepers will closely monitor the lions and make a judgement about when it is appropriate to introduce them.

“Our priority is to educate and inspire the general public about wildlife conservation and improve captive animal management by providing a safe environment for animals under threat in the wild.

“Our keepers are incredibly passionate about what they do and believe that being a resource for the public to learn about animal behaviour and the value of conservation in the world is highly important.”

Dartmoor Zoo was established in 2007 when Benjamin Mee and his family bought an ailing zoo. Since then Ben, his family and team have built the Zoo into the popular tourist attraction it is today. Ben wrote a book about his experience and in 2011 it was made into the Hollywood Film ‘We Bought a Zoo’ starring Matt Damon. In 2014 the Zoo became a charity, of which Ben is CEO. Today the Zoo is heavily involved in research, conservation and education projects to promote the welfare of animals and to enrich both the lives of humans and animals.

To find out more about Dartmoor Zoo visit www.dartmoorzoo.org.uk.

*The population of lions has decreased by 43% in 21 years, after being declared ‘vulnerable’ by the International Union for Conservation of Nature. Source: https://www.awf.org/wildlife-conservation/lion