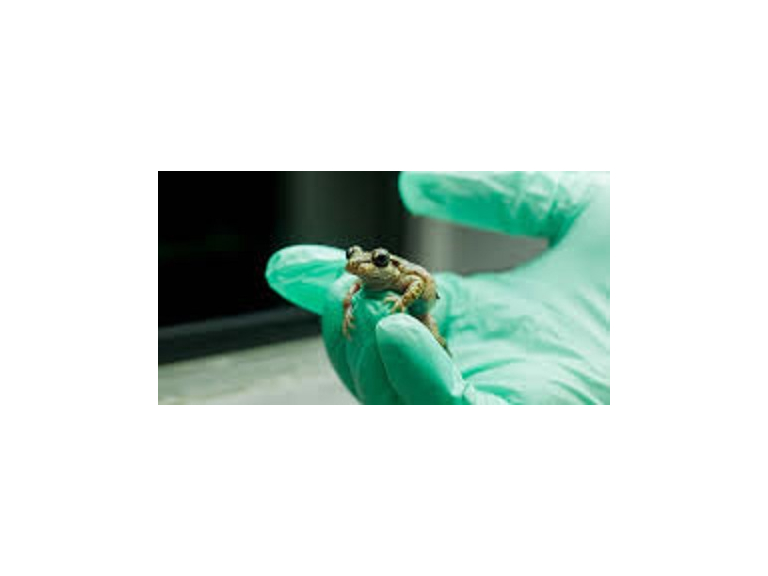 This tiny amphibian is a Majorcan midwife toad. A breeding group has been set up at Paignton Zoo Environmental Park as part of Europe-wide efforts to save the species.

The diminutive size, big eyes and shiny golden-green colouring make this toad extremely appealing. And it’s good to see the male pitching in to help care for the family: like all midwife toads, the male carries the eggs as they develop, wrapping the strings of eggs around its legs like pearl necklaces to keep them moist and protect them from predators.

The Majorcan midwife toad (Alytes muletensis) is found only on the Mediterranean island of Majorca. Fossil remains were found before living specimens, so you might even say that this is an extinct animal that has returned from the dead.

Four male and six females, all around 10 years old, have arrived from ZSL London Zoo. They have come to Devon so Paignton Zoo can be part of a breeding program in collaboration with ZSL London Zoo and the Majorcan government.

The animal staff will need a few husbandry tricks to keep them successfully. The toads need the correct temperature and humidity and the UV levels they would experience in the wild. In their natural habitat, they hide under rocks and in caves, so the keepers have recreated this environment using rocks and broken up clay plant pots donated by the gardening team.

The species is classified as Vulnerable by the IUCN. Restricted nowadays to isolated mountain rivers, there’s estimated to be a wild population of just 500 breeding pairs. It’s thought the introduction of competitors and predators started the species’ decline. Conservationists have reintroduced the species in new areas, and many new breeding populations have been established.

Unusually, the female competes for the male, even grappling with other individuals to secure a mate. Both male and females make a series of sounds to attract a mate during courtship. Paignton Zoo Environmental Park is a registered charity. For more information go towww.paigntonzoo.org.uk or ring 01803 697500.