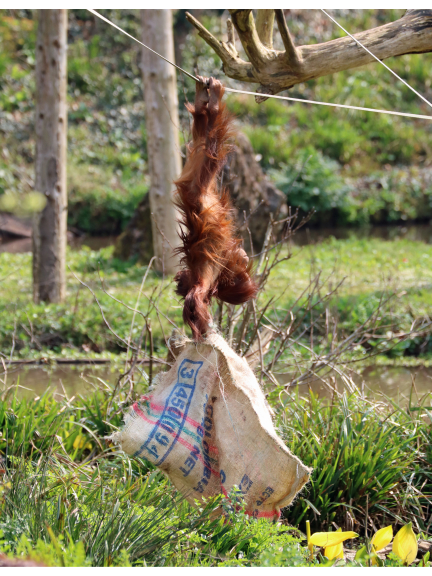 To mark the occasion, she showed off her acrobatic skills with a few tricks involving a sack. The natural fibre hessian sack was one of a number provided by local firm Coffeeman Devon - a family-run business based in Kingskerswell - as environmental enrichment. Enrichment is the science of stimulating animals mentally and physically – and it certainly seems to be working for Tatau!

Tatau and her mother Mali (21) share their home with adult females Gambira and Chinta and Chinta’s daughter Natalia. Mali arrived at Paignton Zoo from Munster Zoo, in Germany, in November 2007.

Orang utans are threatened by hunting, the pet trade and habitat destruction. The Bornean orang utan is classed as Endangered by the IUCN Red List, the world's most comprehensive inventory of the global conservation status of plant and animal species. A species is Endangered when the best available evidence indicates that it is facing a very high risk of extinction in the wild.

Paignton Zoo’s Curator of Mammals Neil Bemment is Vice-coordinator of the orang-utan European Endangered species Programme, which coordinates the efforts of top European zoos to conserve the species. Paignton Zoo Environmental Park is a registered charity. For more information go to www.paigntonzoo.org.uk or ring 01803 697500.