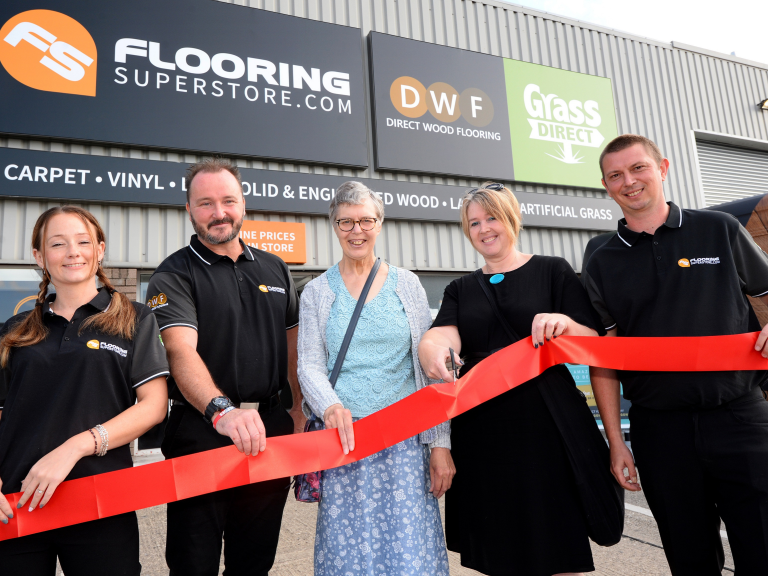 A flooring retailer has marked the opening of its new £100,000 store in Newton Abbot by pledging its support for a local mental health support charity.

The official opening was carried out by representatives of Step One Charity, which supports people to manage their mental health, achieve employment goals and live more independently. Step One Charity is in the process of renovating an existing property in Newton Abbot which provides supported living services for people with mental health problems. Flooring Superstore will be donating flooring as part of the renovation of the building.

Store Manager Lawrence Rowe said: “Prior to opening our new store we approached Step One after hearing about the work and we were delighted when they accepted our offer of support.

“As a family-run, independent company, we are always keen to build links with local organisations/charities in areas where we open new stores.

“We feel it is important to give something back to the community and we are looking forward to working with Step One Charity as they support people with their mental health in Newton Abbot.”

Sarah Ellis, Step One Charity Community Services Manager, said: “We are a not-for-profit charity and any surplus we make is put directly back into the services we provide.

“This is why donations like the one we will be receiving from Flooring Superstore are important because not only will it help to improve one of our existing properties, it means the money we would have had to spend on the flooring can be directed elsewhere.”

Newton Abbot is the 15th Flooring Superstore to open in the UK in the last few years, and the first in Devon. The company behind the 6,000 square-foot store, Connection Flooring, has invested £100,000 and created three new local jobs with the opening.