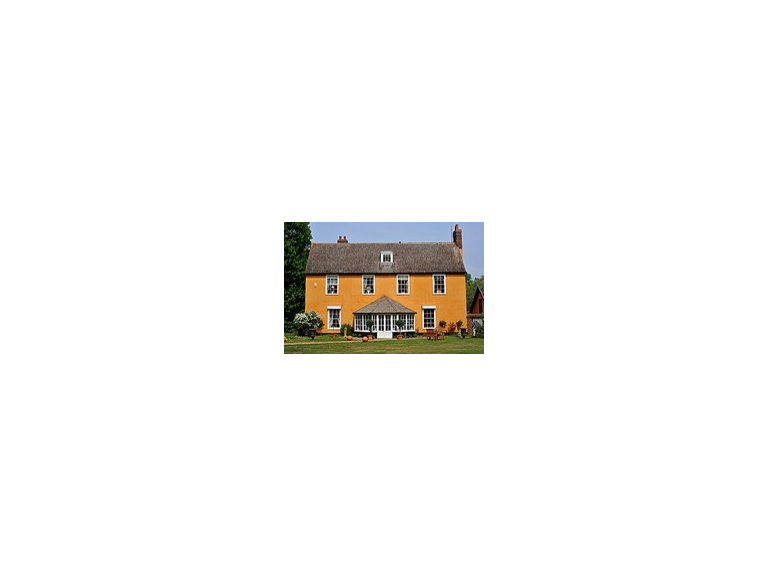 Three men met at a crossroads in Suffolk. One was on a motorbike, one in a BMW, and I was, as usual, there on foot. Each asked the other for directions as it emerged that all three were seeking the same destination; we were all going to a “Best of Bury St Edmunds” morning at Blackthorpe House, once the home of the Agnew family but now the location of a very upmarket bed and breakfast establishment and interior design service and showroom.

Fortuitously at this point, a passing woman took pity and took us there – the sign was there sure enough, but Tony, who runs the place with his business partner, Susie, promised me that he would put up a bigger sign!

Later, I spoke with Sir George Agnew, whose family home Blackthorpe House had been. Indeed, he grew up there. George told me that the house was known historically as Blackthorpe Farmhouse and his parents (Keith and Bus Agnew) had lived there from 1948, when they got married, until they died. George’s father died in 1994 and his mother lived on there until her death in 2005. George’s older brother, John Keith Agnew, was born there in 1950 and George was born there in 1953. Prior to this, Blackthorpe Farmhouse had been lived in by the Woods family whose only son was killed in WW11. There is a small memorial to him in Rougham Church. The house has always formed part of the Rougham Estate, which was bought by George’s great grandfather Sir George Agnew in 1904. The house divides into two parts. The older part including the kitchen and facing into the yard is the oldest, may date from 17th century or earlier, and comprises two floors and a cellar. The front wing is from the 18th century and faces towards the garden. It is on three floors.

Blackthorpe Farmhouse was always associated with its farm buildings, which included Blackthorpe Barn which itself dates from circa 1550.

The porch gives a clue as to what lies beyond. It is full of beautiful furniture and ornaments. Two downstairs rooms display a wonderful selection of crafts and gifts, unsurprisingly given the time of year that I visited, dominated by Christmas. The house faces south and both these rooms are filled with warm winter sunlight. Tony will tell you that, if it doesn’t move, it’s for sale.

The house possesses a charming atmosphere. You can tell that it had been a family home and that much happiness took place here. No ghosts here.

The stairs lead to the first floor by way of a very convincing trompe d’oeil painted on the facing wall, depicting a sequence of archways. I happen to think that grey is a difficult colour to work with, yet Tony has used subtle shades in the first bedroom I entered. This is the Master Suite; once again the fabulous winter sunlight showed it off to best effect; I think we were most fortunate to see Blackthorpe House looking its very best.

Opposite is a dressing room which continues the same theme; after that, there is a bathroom with several striking features. An armchair occupies the corner and is upholstered in a beautiful terracotta.

As you take this in, you see the very bold black and white tiling and, opposite the chair, towels of the very same colour as the chair. A lot of thought has gone into introducing this colour for which, let’s remember, you have to wait for the third room to see.

A moose’s head looks down on you. I didn’t like to ask his history.

Next is the Red Suite. Also south facing, but in stark contrast to what has gone before, here are shades of burgundy, rose and terracotta. The curtains (which like everything else, are for sale) are made from coarse material with fabrics woven in, reminiscent of Indian crewel. These curtains cannot therefore be altered without destroying them. This bedroom also has a dressing room built at right angles to the bedroom, and therefore an east aspect; this would make breakfasting a delight.

Incongruously, a fire extinguisher is found in every room. I suspect that this not just in deference to the Health and Safety at Work Act, but because so many truly irreplaceable things are present.

My personal favourite is found at the top of a stairway which goes through a half turn to deliver the guest into a sitting room and a third bedroom. By this time the grey shades have given way to Wedgewood blues and the transition has been subtle. This room is a twin, and the smallest of the three.

Tony has been here for three years and is justifiably proud of what he has created. He offers a home design service and the house is his advertisement. The rooms are available individually, but Tony will let the whole house if you want a family holiday or party.

Double/twin from £100 for two people per night.