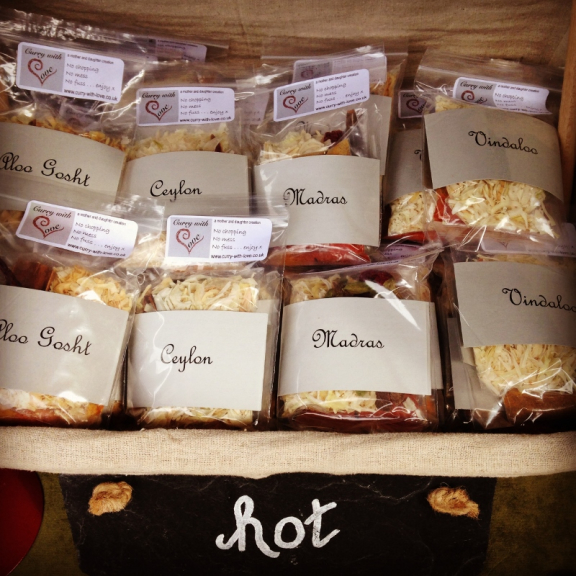 He is quite right to be proud, because this is a fantastic enterprise; Clare Bennett-Smith started selling her curry kits here on the Bury St Edmunds market in November 2011, at first sharing space with her now retired father before setting up on her own. Their business now trades online although, as Clare is at pains to emphasise, most business comes by word of mouth, which is surely the best and most sincere recommendation of all. A Citroën deux-chevaux van decorated with their new emblem is on the way, which will make the transport and display of the products more straightforward. Saul takes all this in.

Clare is his Mum, and Carol is Clare’s Mum. Both are passionate about cooking. Clare explores all styles and nationalities, and it was during an Indian phase that she discovered just how complex it can be to create Indian food with accuracy and authenticity. I think that Clare does things right, absolutely right, or not at all. She gives attention to detail.

For example: starting with freshly roasted and ground spices, using the correct type of oil, with the freshest garlic, ginger, desiccated onion and coriander, a dish can take three hours to prepare. Now, while devoting that sort of time to something you love is a reward in itself, she recognised that not everybody would have the same amount of patience. There was plainly an opportunity for an economy of scale; after all, preparing 100 grams of cumin-coriander powder takes no longer than preparing ten. So, the spices are prepared and blended by hand.

But here’s another thing. Putting the spices all together prior to cooking delivers a different flavour than if the spices are added to the heat individually. I’ve tried it, and Clare is right; and this is a major shortcoming of proprietary curry mixes. So, when you get spices from Clare, the first (of two) packets will display a kaleidoscope of yellow turmeric, brown cinnamon, red chili, according to recipe; in this way, you expose the spices to heat sequentially, rather than together, the better to release their flavours. Once again, this is attention to detail.

The second packet in each kit contains dried onion and, perhaps, a dried chili, or a star anise, or a piece of cinnamon bark, again depending on the recipe. The onion is dried rather than fried (as it is in other brands) because, in the first place, it is healthier, and second, it delivers texture and thickness to the masala.

The kits contain no paste, for the reasons above; preparing the authentic dish is a sequential, not collective, process. Also, no paste means less oil, and removes the need for the kits to be refrigerated or frozen; they can be stored in a cupboard. The kits contain neither gluten nor dairy products, increasingly important nowadays with customers being particular about diet.

Certain dishes work well with particular ingredients, although each is versatile enough to work with anything, meat or vegetarian. Here are a few of my own favourite combinations: beef with the fiery Madras; chicken with tomato and lots of lentils in Dhansak; white fish with the coconut and ginger of the Goan recipe. Slow cooked pork – a particular favourite – and I do mean slow – four hours is the norm. Clare will sell you these at £10 for three kits, or individually. Each contains most of what you need, and where it does not – chopped tomatoes, or coconut milk – the packet says so, and if you don’t have them in your cupboard, Clare can provide these, too.

The ladies also sell Balti dishes and burners so you can present your cooking in the proper style. Some kits come in Kilner jars, which are always useful. At particular seasons of the year they will offer themed products.

It is Carol who wants to tell me how healthy curry is, elevating basal metabolic rate and burning fat. The spices, rather than being fried until fragrant, can be boiled instead so as to reduce further the amount of fat used. We agree that one ingredient we could never do without is tomato; the ubiquitous fruit.

And with that, I take myself off home to try a new recipe. I know I’m going to enjoy it, and that my guests will, too.