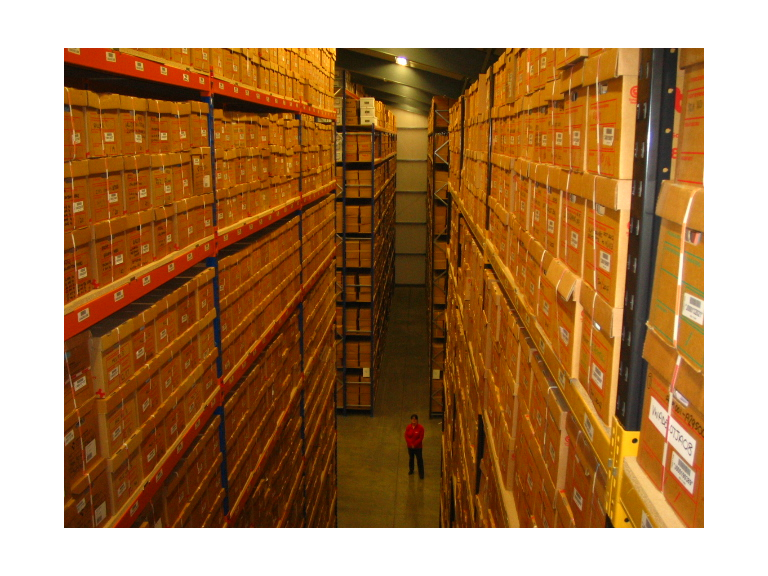 Well, most people would consider Jennifer Lawrence to be sexy. The recent theft of intimate photos from her iCloud storage, subsequently appearing on social (antisocial?) websites, would seem to demonstrate that data stored in “The cloud” is vulnerable to determined hackers. Prove me wrong.

I ask Claire what her job title is at Box-it in Risby. Claire pauses, before saying, “That depends on what needs doing”. She has performed every task within her business, the better to understand how it works as a whole. This seems a very good approach; so, she does order processing, picking boxes, delivering boxes, unloading and shelving the boxes, hosting ISO and client audits.

I am offered a trip in the cherry-picker. The small boy within jumps at the chance and quite soon I am looking down from 100 feet at where we have left Claire. The enormity of the operation is immediately apparent. There are boxes, and boxes; row upon row, stack by stack. There are 180,000 of them, with room for 70,000 more; each sealed, barcoded and set exactly in line with their neighbours. The little boy gives way to the adult with well-developed obsessive-compulsive disorder. To me, it looks like heaven.

Box-it is a nation-wide franchise dealing with secure document storage, both actual and electronic, and its secure destruction.

To be serious for a moment, a very good friend of mine was, for a time, the President of the History of Anaesthesia Society. Modern anaesthesia is a little over 150 years old. Neil’s task is to document the history and curate the museum of anaesthesia, pain relief and intensive care. In 1986, the BBC embarked on a Doomsday project, creating a snapshot of life in Britain. Claire herself contributed as a schoolchild, along with a million other volunteers. The data was stored on BBC Acorn computers, and this was its downfall, for today it is mostly inaccessible; no Acorn technology survives, and the media used to store the vast amounts of data is corrupted. If Neil wanted information from it, he would most likely be disappointed.

By contrast, Neil can go to the British Library and, after donning cotton gloves to protect the material, he can read the very first edition of the British Medical Journal from 1840. The Magna Carta was recently on display in the Cathedral, hermetically-sealed within a protective atmosphere and shielded from light, but readable now just as it was on 15 June 1215. Ink on paper, properly cared for, endures; electrons dancing on silicon lose interest after a while. Huge amounts of stored information from the last 30 years will never be seen again. We have tripped over our own feet in our rush to embrace technology.

Claire doesn’t store the Magna Carta, but she does look after documents entrusted to her by many organizations and individuals.  The atmosphere within the warehouse is meticulously maintained at the optimum for paper storage. The walls are clad with insulation 6” thick. An enormous, tubular device high above is a dehumidifier, maintaining the humidity precisely between 55 and 61%. There is not a speck of dust. The temperature is also regulated to a shirt-sleeve environment regardless of conditions outside although, as Claire emphasises, important though temperature is, it isn’t as vital as humidity, about which they do obsess. The environment is also inhibiting to fire; the boxes, (which are acid-free, of course, with respect to their contents) contain no accelerants and the presence of a duty manager and the fire service is guaranteed within 15 minutes of a smoke alarm being activated. Or, within 15 minutes of a spider crawling across a sensor. But the place is immaculate and no spiders are to be seen. There are no sprinklers. Papier-mâché is as useless as ashes and cinders. But when data does need to be destroyed, it happens on-site (so nothing leaves the facility in useable form – we’ve all heard about hospital records turning up on landfill sites), under the direct visual supervision of a manager, and the pulp generated will made into the paper to fill the next 70,000 box spaces – or into your chip shop paper, or the FT, or you’ll be wiping your bum on it!

So, to return to my original question, how would Jennifer Lawrence regard Box-it? The eager hacker would have to find the warehouse and overcome the fencing and avoid the CCTV protecting the whole estate, before identifying Box-it’s facility, whose own fencing and CCTV would then have to be overcome. He (a she would be unlikely in the circumstances) cannot ram-raid the door because it is protected by a crash barrier. Even if so, once inside, the boxes bear only a barcode and location, so our villain now has 180,000 boxes to break open and tip onto the floor. If he opens one every minute, it will be 18 weeks of continuous activity before he can be remotely sure of finding the photos.

We do discuss electronic data, but I don’t press on the subject because I know that it is commercially-sensitive. Suffice it to say that nothing is committed to email. No electronic data leaves the facility, but access is achieved by means of possession of credentials leading to links rather than to the data themselves.

Of businesses which suffer a catastrophic fire destroying some or all of their data, 80% will never recover to commercial activity. So, give it to Claire, and she will look after it for you.