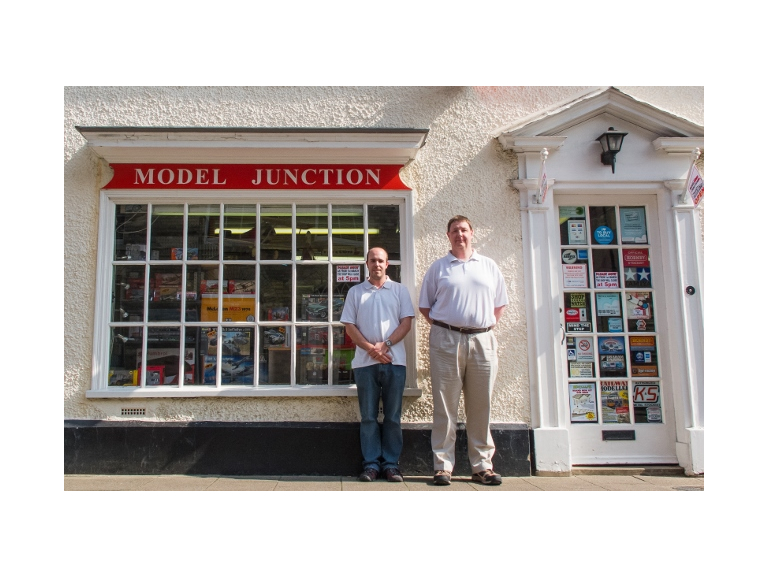 David Munnings and Owen Calloway now run Model Junction, in Hatter Street. Do you remember the Carlsberg TV adverts? Carlsberg don’t make model shops. But if they did, it would probably be… well, this one really.

Keith Burroughs created the business in 1978 and handed over to the boys in April this year. What David and Owen got was a flourishing business with a very loyal customer base, locally, nationally, and overseas. All three are genuine enthusiasts and use their passion for the benefit of their customers. David’s is for radio-controlled cars. He started with radio-controlled aircraft, but freely admits to being a terrible pilot. “At least you usually get a car back,” he says, ruefully. If any landing you walk away from is a good landing, you get the impression that David didn’t have many of those.

Owen, on the other hand, finds fascination in the engineering of the boats, cars, and aircraft that occupy one third of the shop. He studied engineering to a sufficient level so that, watching him with a favourite locomotive in his hands, he looks comfortable, and I am confident of his ability to fix it. I work out that, collectively, the three of them have 74 years of modelling experience; there is little that they haven’t seen. David is especially proud that, in the internet age, he can offer advice and experience to his customers, something that can’t be had online. If you are puzzled by the fit of a part, or the running of a loco, he and Owen have probably been there, and will gladly guide you through it. While I am in the shop, they field an enquiry. Impartial advice is offered, and a solution suggested. No sale is made, but that doesn’t matter. That anonymous caller will remember the friendly response and advice and may become a customer.

These men aren’t geeks or anoraks, but neither are they earnest or humourless. They enjoy a laugh with their customers, who aren’t exclusively men, either; one of the most accomplished railway modellers who visits the shop is a lady with a terrific eye for detail and colour.

Then there’s Richard, who you’ll see behind the counter at weekends, who escapes from education to the world of railways. And sometimes Yik, who is a real-life aerospace engineer. We recognise various scales for railway, and other, modelling; the Hornby railways, which everyone recognises, are built to 1:76 scale, or, for convenience, 4mm to every real foot; models at N gauge are 2mm to the foot; so Yik’s aeroplanes are 12 inches to the foot. Just like the real trains that we all prefer to any other mode of transport. If only it was more affordable: a discussion follows, on whether money spent by a reluctant government on the railway is subsidy, or investment. That’s for another time, but we all feel strongly on the matter. You don’t learn only about modelling in Model Junction.

We remember from school that all of Gaul (France) is divided in three parts.* In Hatter Street, one third is devoted to remotely-controlled boats, planes and cars, another third to construction kits, and the final third, my personal favourite, to trains. The technology here is progressing rapidly, with locomotives that can emit sound synchronously with their motion. They can be instructed to make the sound of a guard’s whistle, a driver’s air horn, the clank of a coupling or the squeal of wheel flanges on steel rail. You know this sound, even if you don’t realise it; the sound of a slow-moving train negotiating points and curves as it makes its way into or out of a station or yard. The noise is akin to blowing across the top of a bottle, and really is known as flange squeal, to my friend Nick’s amusement. (He’s easy to entertain). Train wheels are rigidly mounted on axles, so in going around a curve, one wheel travels further than its companion on the opposite side of the axle, and in doing so, its flange slides on the rail instead of rolling; this is what makes the characteristic noise, which a model locomotive can now imitate to great effect. This is part of what is known as digital command and control, or DCC for short, and really brings railways alive. DCC also allows you to make a train accelerate and decelerate realistically, to operate several locomotives, independent of each other, on the same length of track; steam engines can even be made to emit smoke. This is Keith’s area of interest, for although he is retired, he continues to work part-time installing and servicing DCC technology.

Everyone knows of Hornby, but for the enthusiast, Bachmann, (an American company, but trading in the UK as Bachmann Branchline) offers greater authenticity. Both companies manufacture overseas for reasons of economy, but the introduction of a minimum wage in China – undeniably a good thing in a culture renowned for exploitative labour – has inflated prices in the UK. However, we still pay less than modellers in France and Germany for our trains, so we need to get used to it.

Do they have a typical customer? Not at all. A lady comes in for enamel paint with which to repair her bath. A man who is building, from scratch and not from a kit, a Lancaster bomber with a 10-foot wingspan, which will fly by radio control when complete. A man servicing coffee machines, who needs a pipe of a particular material and precise diameter.

Radio control, construction kits, and model railways endure while others come and go. Warhammer, a game where you paint, display and then play wargames with the figures, enjoyed popularity years ago but has died at the hands of the electronic console. Paradoxically, construction kits are now purchased by parents anxious to separate children from their consoles and to introduce them to a hobby with tangible creativity. This seems to me to be a very fine idea.

If you call in on any Saturday morning, the atmosphere in Model Junction is more like a club than a shop, populated by enthusiasts in each of its thirds; the plastic modellers, looking for the newest kit or most accurate shade of paint; the radio-controllers, and the unmistakable smell of electronic components; and the railway modellers. I’ll be among them. See you there

*Gallia est omnis divisa in partes tres. De Bello Gallico, by Julius Caesar. The Gallic wars, which he won for Rome. An away fixture. A classical reference in an article about model trains, planes and cars. Oblique, or what?