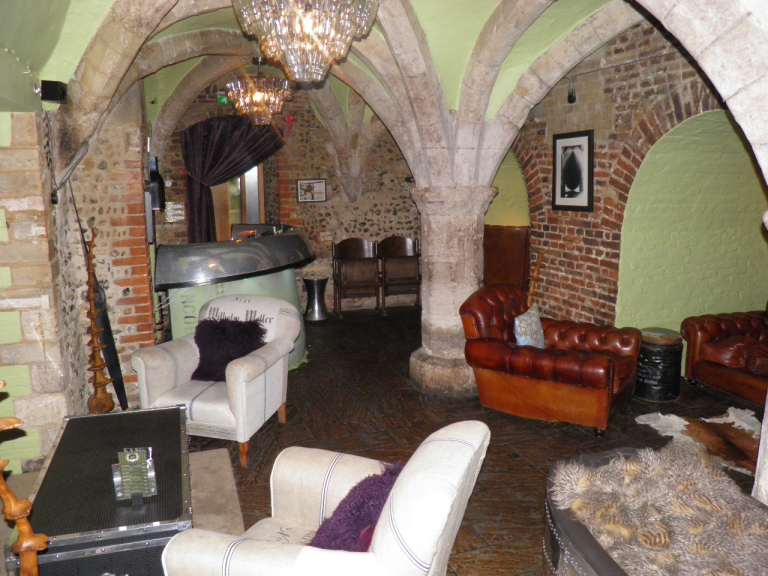 Although, as she is keen to tell me, the organisation she has worked for since the beginning of the year involves so much more than just the famous hotel on Angel Hill.

There has been an inn here since the establishment of the Norman Abbey at the beginning of the twelfth century. What you see now was built between 1774 and 1779 by John Redgrave, at a time when William Wilkins was building the Theatre Royal. Charles Dickens stayed here, twice, and wrote “The Pickwick Papers” here.

It’s been a while since I’ve visited and so, when we met for coffee, I was interested to see what has changed. The access to the bar and dining room has been modified so that each is immediately opposite the other, reflecting the common purpose of both rooms as both bar and dining area. It is much less formal than before, and much more welcoming. I have a recollection of the “old” dining room one morning when Sir Donald Sinden and supporting cast were taking breakfast there while in performance at the Theatre Royal. The commanding presence of the actors in what was already quite an intimidating room seemed quite in keeping. I prefer the new arrangement.

My earliest memories of the Angel were of the annual Doctors’ Armistice Dinner, a tradition going back to 1919 when the doctors who had served in the Great War held a dinner at the Angel to thank those who had stayed behind for caring for their patients in their absence. The following year, the town doctors returned the hospitality and the dinner has taken place every year since then, with the exception of the years of the Second World War, albeit with the Chair now alternating between a General Practitioner and a West Suffolk Hospital Consultant. It is a fine tradition marked by the wearing of black tie, medals and the consumption of Madeira. However, the ballroom, where the event was always held, was used for the development of additional bedrooms some years ago and the event has had to find a different venue, none of which has come close, in my view, to the experience of dining in the original.

I didn’t recognise the distressed-looking Union Flag in the hall. Closer examination shows it to be deliberately so, and the signature in the bottom right is that of Vivienne Westwood. The black and white portrait of Mick Jagger and Jerry Hall is by Norman Parkinson and very familiar. There is work by Constance Stubbs, who is a local artist, and by Antony Gormley and Daphne Reynolds.

The display of art is not what you might expect. It turns out that the collection was inspired by the owner, Robert Gough, and created by Stephen Walton. Stephen is a local collector and dealer who exhibits in a number of locations; currently, he has a gallery in Langton Place. Stephen and Robert, in their own words: “Each wall is a picture of exuberant styles all vying for attention and a closer look. Nudes, landscapes, abstract forms, photos and pop art all mingle together in an exciting yet ordered chaos.”

It is below floor level that the most interesting change has taken place, in my opinion. I’ve always had a fascination for that which remains unseen; if you want to capture my attention for an hour or two, sit me down and tell me about the tunnels beneath the town. Can you walk from the Nutshell to the Cupola? Is there really a tunnel out towards Fornham? Starting from the vaults beneath the Angel, where could you go…?

Sonia drags me back to reality and down the stairs to “Wingspan,” which is the bar beneath the Hotel. You may have visited this when it was known as “The Vaults,” since when it has changed considerably. Although it has been open in its current incarnation for a year, this was my first visit and I loved it. The stairs themselves are illuminated in the style of landing lights, which I found useful from a purely practical point of view. An age thing. Anyhow, at the foot of the stairs you’ll find an unusual bar formed in the shape of a nacelle. For those of you without the benefit of an aeronautical background, that’s the cowling that surrounds an aircraft engine. It’s illuminated from within with a mirror behind and is really quite effective. Everywhere, things are made of polished aluminium; the lights are sharp without being overpowering, with corners for assignations as well as open spaces for larger groups; about 35 people can fit in here. Even the menus are bound with aluminium. If you have visited the Rose Garden in the Abbey Gardens, where there is a bench, a gift from the American Air Force made from aluminium, you’ll recognise the style. Even if the Americans, bless them, described our town as a city. Hessian from recovered flour sacks has been used for upholstery – an unusual, but striking, feature. A lot of thought has gone into this. The vaulted ceiling still remains, of course. How many assignations have taken place in its shadows? How many deals struck, promises made and broken?

I’ve left the most ambitious project to last. Sonia told me about the pier at Southwold, which I must have visited half a dozen times in past summer days. The Angel and its sister hotel, Salthouse Harbour, have acquired the pier. They have ambitions to develop a hotel where the amusement arcade now stands, and to expand the shops both in floor space and range of merchandise sold. Sonia was at pains to emphasise that care will be taken to preserve the atmosphere and heritage of the pier, so you’ll still be able to enjoy an ice cream while watching the anglers at work. The plaques erected by regular visitors, often in memory of a loved one, and which are such a feature of the place, will, I understand, be preserved. I think this is important as they encapsulate so many memories. “He loved this place,” “wonderful holidays” and more will still be there.

The pier is a huge project and I wish them well in their endeavour. I’ll look forward to Sonia showing me round there, too, when it is complete. Back at home, do call in at the Angel, especially if, like me, it’s been a while. You’ll love it.