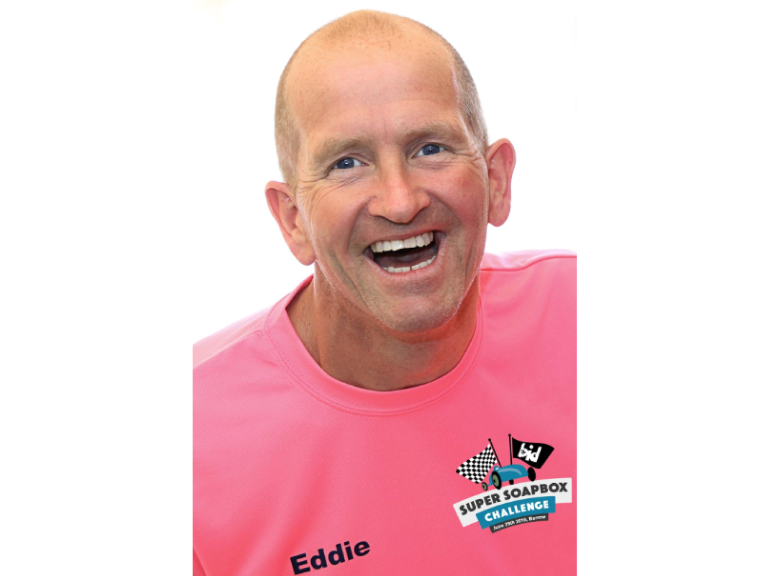 Barrow Bid's Super Soapbox Challenge takes place on Saturday 29th June 2019 in Dalton Road. What already promises to be a spectacular event has now been given the Olympic seal of approval from a star who's no stranger to hurtling down a large ramp with only the cheers of the crowd and gravity for company.

Eddie the Eagle Edwards has been unveiled as the star name who will be launching the town's inaugural Soapbox Challenge.

Eddie is best known for launching himself off ski jump ramps and represented Great Britain in the 1988 Winter Olympic Games. More recently he won the first series of TV diving show Splash and was a commentator on Channel 4’s The Jump. Eddie won’t be tackling a 90m ramp when he comes to Barrow, but he will be piloting the Barrow BID cart down the launch ramp first to set the fastest time for other competitors to beat.

The Barrow BID Super Soapbox Challenge event will be held in Barrow Town Centre on Saturday 29th June, from 10am – 5pm, with the course starting from the top end of Dalton Road and finishing near Town House at the bottom end. Entry is now open to everyone, however, there is a limit of 50 carts on the day and Colin Garnett, BID Manager informed us they are 20% full already with entrants as far away as Blackburn. If you would like to enter, visit: supersoapboxchallenge.co.uk/barrow

Colin Garnett, BID Manager said, “The Soapbox Races will be launched down a two storey ramp in hand-made soapbox carts. It might not be an alpine ski jump, but Eddie should feel right at home piloting our Barrow BID cart. I think Eddie is a great addition to the event, as it is all about having fun and not taking yourself too serious. We want participants to dress up and design carts that reflect their business or charity.”

Colin Garnett was also delighted to announce that local wind farm company, Orsted, has agreed to sponsor two Soapbox launch events on Friday 28th June. The first event will be a showing of the family-friendly 2015 film entitled, Eddie the Eagle and Eddie will present the film and talk about his career, inspiring youngsters to aim high and follow their dreams. The second event will see Eddie teamed up with a compere and comedian for an evening of adult entertainment, where Eddie will amuse guests with his funny stories. Tickets for these two shows will be released in February and will be available first on facebook.com/visitbarrow

The Barrow BID Super Soapbox Challenge event is a great opportunity for engineering and manufacturing companies, town centre businesses, charities and the local community to come together and put on a prestige event right in the heart of Barrow, so…Come on Barrow Let’s Soapbox!

More about Barrow BID at: barrowbid.co.uk

Shop in the comfort of your home with Barrow Market Hall