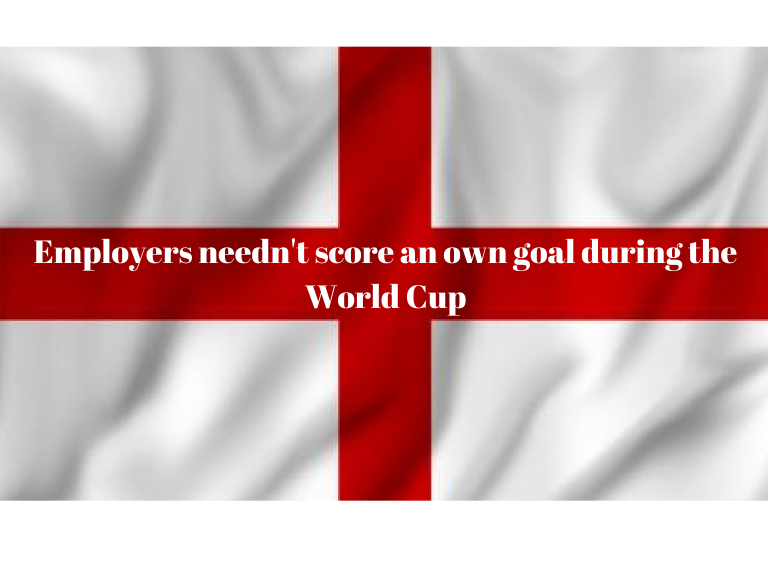 The World Cup is a fantastic tournament.  It’s a landmark sporting event that’s watched by Billions of people across the world.

But amongst the excitement and anticipation that the World Cup brings, there’s also uncertainty and anxiousness when the subject of watching World Cup games at work gets mentioned.

The World cup features 32 teams, and because it’s such a large tournament, matches will be kicking off at various times throughout the day and night. Some kick off as early as 11am, with the last matches taking place at 7pm at night.

England’s matches this year in the group stages are:

You wouldn’t think that these fixtures would cause too much disruption for employers – but it’s worth bearing in mind that 1 in 4 employees (5.7 million people) work nights – and many of those will also want to watch matches.

Employees may ask for time off, they might turn up late, or not at all. It’s in no-ones best interests to have a bad atmosphere in the workplace, so it’s always wise to try to find a compromise.

So do employers have to give you time off to watch the matches?

They don’t have to, they do have to consider a genuine request for flexible working hours – however I don’t think that rule was designed for the World Cup! Employers are being asked to not score an own goal by not allowing staff to watch games during the World Cup.

Rather than it being a disruptive influence, being flexible with work hours and allowing staff to watch matches during the World Cup can have a positive effect in the workplace.

It can help to build camaraderie, team spirit. It brings people together, helps them communicate more with each other and can lift the mood in the workplace (especially if the national team goes on a decent cup run)

So allowing people to watch – or listen to matches in the workplace can be a good thing, fighting against it could potentially score you an own goal

The World Cup is a fantastic tournament, if employers embrace the spirit of it, then they can, with a bit of thought and understanding, benefit out of it too.

14 Days of Giving
Sign up for offers
Sign up for what's on guide
Become an author
Popular Categories
By clicking 'ACCEPT', you agree to the storing of cookies on your device to enhance site navigation, analyse site usage, and assist in our marketing efforts.
For more information on how we use cookies, please see our Cookie Policy.