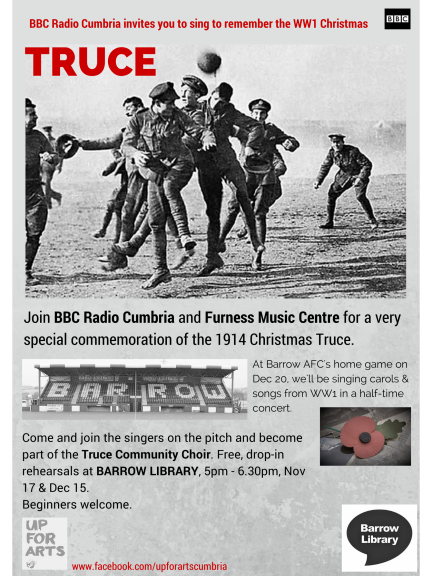 Aspiring singers are being invited to step on to the pitch for a special Christmas concert to commemorate the 1914 Christmas Truce.

At half-time at Barrow AFC’s home game on December 20th, The Truce Community Choir will lead the crowd singing songs of WW1 and Christmas carols.

“It’s a great opportunity to get involved with a choir and be part of a very special occasion,” said Liz Wiejak of Furness Music Centre’s Community Choir. “We’ll be doing some fun singing exercises to get everyone warmed up and then taking everyone through the arrangements of the songs including Silent Night, Pack-up your Troubles, It’s a Long Way to Tipperary and Only Remembered which people may know from the film War Horse. They’re songs the troops sang that are both moving and uplifting, much like the Truce itself.”

Letters collected from local papers by a Whitehaven-led project reveal the details of the Truce that’s being marked across the UK this Christmas as part of WW1 centenary events.

In one of the most famous letters received by Harry Penfold from Brampton and published in The Westmorland Gazette in 1915, an officer in the Royal Army Medical Corps wrote of the outbreak of Christmas goodwill.

“All joined together in a sing-song each side taking it in turns to sing a song and finally they ended up with God Save the King in which the Saxons sang most heartily. This is absolutely true. One of our men was given a bottle of wine in which to drink the King’s health. The regiment actually had a football match with the Germans who beat them 3-2.”

Another Maryport Private wrote: “Christmas in the trenches! What a time! ‘Peace on earth, goodwill toward men.’ It is hardly to be believed, but nevertheless it is quite true that such was the case this Christmas. Who can realise it? It will astound everyone who hears about it, which everyone will do in good time.”

Peter Garbacz of Barrow AFC is supporting the performance at the home game against Bolton on December 20th.

“There’s always a special atmosphere at Christmas games and I think this will add to that prompting rousing singing that will mark an important moment in history. I think fans will really get behind it. ”

BBC Radio Cumbria’s Up for Arts project is organising the event with the club and Furness Music Centre and it will be broadcast as part of its Christmas programmes.

Anyone wishing to take part in the choir and sing on the pitch is invited to pop along to Barrow Library for the two rehearsals on Monday, November 17 and December 15th, from 5pm to 6.30pm. Participation is free and members of the choir can also watch the match for free.

For further details please contact Jennie Dennett, Up for Arts Cumbria on 07711 348907