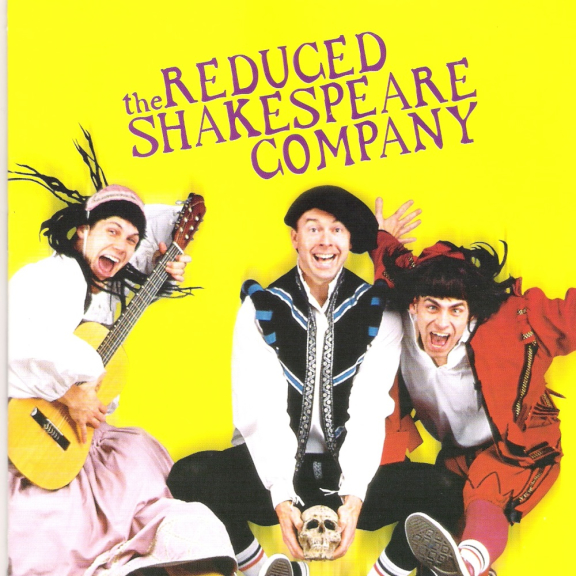 The Reduced Shakespeare Company is a three-man comedy troupe that takes long, serious subjects and reduces them to short, sharp comedies. The “Bad Boys of Abridgement” have created seven stage shows, two television specials, several failed TV pilots, and numerous radio pieces – all of which have been performed, seen, and heard the world over.

Since its 1981 origins as a pass-the-hat act in California, the Reduced Shakespeare Company has created seven stage shows, two television specials, several failed TV pilots, and numerous radio pieces – all of which have been performed, seen, and heard the world over. The company’s itinerary has included stops at the White House, the Kennedy Center, Lincoln Center, London’s West End, Seattle Repertory Theatre, American Repertory Theatre and Montreal’s Just For Laughs Festival, as well as performances in Israel, Australia, New Zealand, Hong Kong, Japan, Malta, Belgium, The Netherlands, Singapore and Bermuda – plus countless civic and university venues throughout the USA, Great Britain and Ireland.

Join them for an irreverent, fast-paced romp through the Bard's plays, The Complete Works of William Shakespeare (abridged) was London's longest-running comedy having clocked a very palpable nine years un London's West End at the Criterion Theatre.  Join these madcap men in tights as they weave their wicked way through all of Shakespeare's Comedies, Histories and Tragedies in one wild ride that will leave you breathless and helpless with laughter.

Now revised for 2013 with the same recycled jokes - just put in a different order!

What the critics say:-

Find out more about the Reduced Shakespeare company here :-

You may book this event through The Forum’s Box Office or online here :-