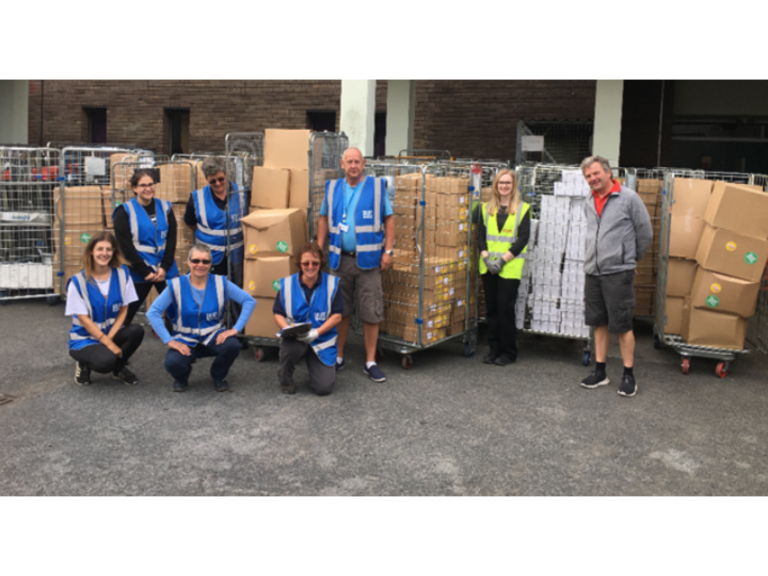 The ‘Salute the NHS’ packs have provided staff with nourishing and high-quality food and come in a variety of different types including 'main meal', 'snack' and 'boost/on the go' packs (for the Trust’s staff based in the community and NWAS staff). Around 300 ‘soothe packs’ which include items such as nourishing hand cream have also been delivered to staff.

This great example of local partners working together during the pandemic has seen 36 volunteers from the British Red Cross and 20 volunteers from the NWAS Community First Responders deliver more than 2,000 packages a day over the past six weeks to help NHS staff who are working on the frontline.

The national 'Salute the NHS' campaign was started by British businessman, Ron Dennis, CBE and catering expert, Nigel Harris, to honour NHS workers for their efforts during the current crisis. The packs will continue to be delivered to staff until the middle of July.

Stuart Hosking-Durn, Head of Resilience & Patient Flow, UHMBT, said: “It is nice to be able to celebrate what we have achieved so far which has been an enormous task for all involved. The volunteers from The British Red Cross and NWAS First Responders have really gone above and beyond to deliver these packs to our staff – a massive thank you from me and everyone at UHMBT

"A huge thank you goes to 'Salute the NHS' for the food which has been donated to our staff at the Trust and our colleagues at NWAS. We have had some really heart-warming feedback from staff who really appreciate the packs and the kind gesture behind them.

“We received a pack recently which had written on it that it was the 500,000th pack that had been delivered nationally. It is staggering to think about how many packs have been delivered to NHS staff across the country.”

Mark Evans, Regional Blue Light Collaboration & Community Engagement Manager, NWAS, said: “We have recently introduced ‘boost/on the go’ packs for community staff at the Trust and NWAS staff which include items such as salads. Our fantastic volunteers have delivered up to 4,500 of these packs to NWAS staff and they are really appreciated.

“This has been a great opportunity for NWAS to work in partnership with the British Red Cross and UHMBT to show how much we all appreciate our NHS colleagues and everything they do.”

David Taylor, Senior Emergency Response Officer for the British Red Cross in Cumbria, said: “We are always looking for opportunities to help and work closely with other organisations in the local area and this has been a tremendous opportunity for us as an organisation and our community reserve volunteers to show their support.

“The feedback from our volunteers has been really positive. They have loved delivering the packs to staff who have been very thankful.”

“Thank you to Salute NHS, Community First Responders and the British Red Cross volunteers who have helped to distribute your amazing food packs to staff in Lancaster, Kendal and Barrow.”

“What a great thing. Thank you.”

The partnership is looking for any staff in hard to reach groups who have not received a pack to come forward. You can contact Stuart on 07887833420 or stuart.hosking-durn@mbht.nhs.uk

Thrills and Chills this Halloween in Barrow and Furness!
Sign up for offers
Sign up for what's on guide
Become an author
Popular Categories
By clicking 'ACCEPT', you agree to the storing of cookies on your device to enhance site navigation, analyse site usage, and assist in our marketing efforts.
For more information on how we use cookies, please see our Cookie Policy.