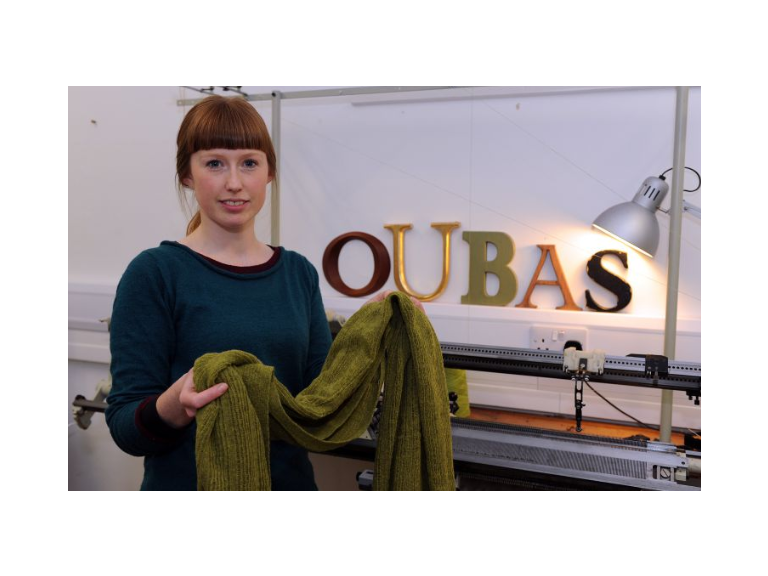 You may have seen the trailers for The lady In The Van recently. It's a new British Film adapted by Alan Bennett from his 1999 hit west end play of the same name.

The film has received rave reviews, and Dame Maggie Smith (who can do no wrong in our eyes) has even been tipped for the Best Actress Oscar for her performance.

The film had its premiere in London’s Leicester square recently, and it came as a “bizarre but amazing” surprise for Ulverston born knitwear designer Kate Wilson that Alan Bennett attended the event sporting one of her fabulous creations!

Ms. Wilson was aware that Mr Bennett had purchased a couple of her scarves from one of her retailers (Yew Tree Barn in Low Newton), and because brightly coloured scarves are his signature look, had always kept an eye out for any pictures of him wearing one of them.

So when photos emerged of him wearing a ‘Brant Wrap’ (named after Ms Wilsons Parent’s home Brantbridge) she was delighted.

"I'm really happy and flattered that he chose my design himself. Alan Bennett's style is quite country heritage and he's a British gent, so he is exactly the sort of celebrity I love to see wearing my knitwear."

Having such a celebrity client is fantastic news for Ms Wilson. Her company Oubas Knitwear was formed in 2012 in Ulverston, where she worked out of her parent’s home; making everything on her Italian made Santagostino Industrial Knitting Machine. The company now has its own studio in Witherslack.

In order to grow and develop her business, she decided to outsource some of the work for her garments to a wool mill in Scotland this Autumn, where they are able to replicate her design of stitch.

With such a celebrity endorsement, the future certainly looks bright for this wonderful local business, long may it continue!