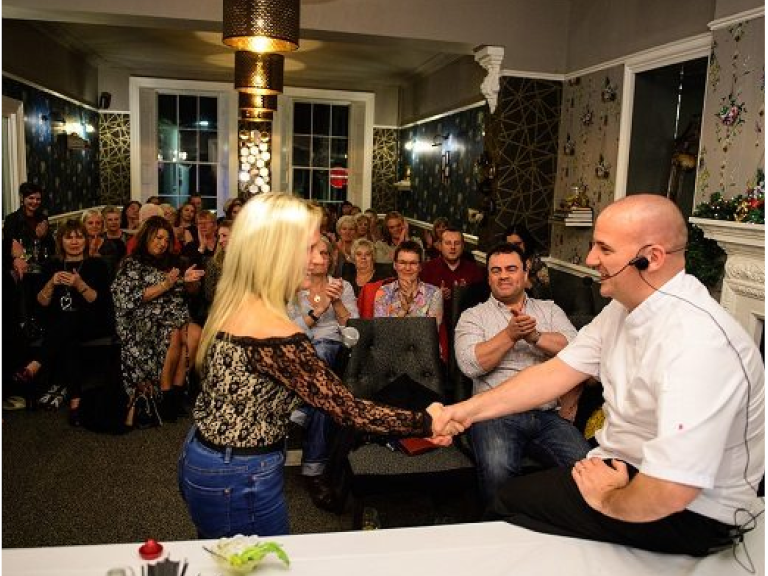 Craig Sherrington held a glamorous Christmas Canapes and Cocktails Demonstration at his fabulous restaurant ‘Craig’s Kitchen’ at Virginia House in Ulverston in aid of CancerCare North Lancashire and South Cumbria.

The flamboyant and finely-honed cookery skills Craig showcased during the Great British Menu competition were much in evidence as he wowed the rapt crowd during the sold-out event on Sunday, November 18th

Craig, who was born and brought up in the Lancaster and Morecambe area, said: “It went very well from our point of view. I really enjoyed it.

“Simon did a fantastic job of mixing cocktails to go with my canapes.”

Emma Athersmith, Barrow and Furness Fundraiser, who worked with Craig on the event, said: “We are expanding our fundraising activities in the Furness area and Craig said he would be delighted to be an ambassador for CancerCare.

“It was fantastic that the event was sold out and Craig’s demonstration was truly impressive.

“When Craig’s canapes were cooking. There was a selection of canapes and cocktails for audience members to try and everyone said they were delicious. Craig and Simon definitely showed that they were masters of their trade!”

After the demonstration there was a light-hearted question and answer session led by Andrea Partridge, CancerCare’s Volunteer and Engagement Officer.

Andrea, one of Craig’s ‘superfans’, spoke about her experiences of breast cancer and then asked Craig a series of questions including one about what food he had on his wedding day. Craig said he’d prepared the menu himself and had tasked some of his chef colleagues from Storrs Hall in Cumbria to prepare it. He said he just about managed to stay out of the kitchen!

Craig said: “It was really nice to hear Andrea’s story and to see how CancerCare had helped her.

“It was a motivational boost for me and others to help CancerCare. It’s such an amazing charity and it touches so many people’s lives. It was an emotional experience to hear Andrea speaking. I was in awe of her.”

The event ended with a laid-back and soothing set by local band, Starcrossed.

Craig trained to be a chef at Lancaster and Morecambe College before going on to work in several top restaurants in Cumbria and across the UK. In the Great British Menu TV show he narrowly missed out on the opportunity to cook at a prestigious banquet in honour of NHS employees.

Craig and his wife Louise have kindly donated a superb prize of two ‘Great British Menu Experience’ vouchers worth £300 per couple (£150 per person including four courses and wine) which will be raffled off by CancerCare.

Craig’s exquisite Great British Menu Experience dishes include a starter called ‘There Goes the Bleep’ which is based on a chicken curry ready meal and his fish dish called ‘In It For The Long Trawl’ which earned him a perfect 10 from Michelin-starred chef and judge, Michael O’Hare. This dish features mackerel, cockles and brown shrimps in celebration of produce from Morecambe Bay.

Craig’s main course, ‘A Sense of Occasion’, includes fillet of Dexter beef and shin pie with cabbage, cauliflower and truffle. He received four tens each time from the Great British Menu judging panel for this dish.

Finally, his dessert, ‘The Missed Celebration’, features Craig’s take on Christmas pudding and a Christmas cracker with a special poem in it.

Full details of the raffle will be available on CancerCare’s website and social media platforms at the start of December.

Craig is now in a ‘Whatsapp’ group with fellow chefs from the Great British Menu called ‘The GMB Naughty Boys’ as they were always joking around on the show.

Plans are afoot for some of the ‘GMB Naughty Boys’ to join Craig for events in South Cumbria.

Craig is keen to do more fundraising events with CancerCare and details of these will follow in the New Year.

Craig and Louise are also selling a gin advent calendar in aid of CancerCare. Details of this can be found on Facebook at:www.facebook.com/virginiahouseulverston

Can you Help Barrow Foodbank?
Sign up for offers
Sign up for what's on guide
Become an author
Popular Categories
By clicking 'ACCEPT', you agree to the storing of cookies on your device to enhance site navigation, analyse site usage, and assist in our marketing efforts.
For more information on how we use cookies, please see our Cookie Policy.