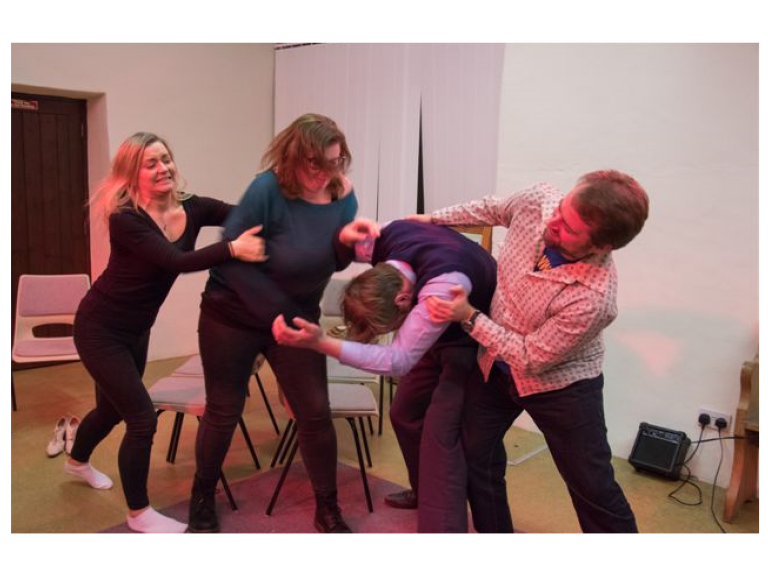 I’d just watched a rehearsal for the Ulverston Outsiders latest production – Bedroom Farce at The Quaker Barn in Meeting Lane. This was one of the final rehearsal dates before the play would performed for the general public at The Coronation Hall, and Director Barbara Springthorpe was addressing the cast after a successful run through of Act Two of the play.

Ulverston Outsiders perform two plays every year and the first for 2018 is Alan Acykbourn’s Bedroom Farce. This wonderful play is widely considered to be one of Ayckbourn’s funniest plays. Bedroom Farce takes place in the bedrooms of three married couples during one, long night. Ernest and Delia are celebrating their wedding anniversary after many, many years of marriage; Malcolm and Kate are gearing up to host a party in their new ‘love nest’; while Nick and Jan are trying to cope with Nick’s recent back injury which has left him stuck in bed while Jan goes to Malcolm and Kate’s party without him. Each couple’s relationship has its problems but they are all tested when Trevor and Susannah’s dysfunctional, miserable marital issues are inflicted upon them….in their own bedrooms!

The cast have been rehearsing since January, and wow, did it show!

The whole process of acting, learning your lines, remembering them on show night, understanding where to stand – and where not to, how to project your voice,  the nuances, mannerisms and facial expressions to make it all believable – fascinates me.

I’ve never had the courage to do anything like this (well not since my majestic performance as shepherd no.2 in my primary schools nativity – but that probably doesn’t count) so an invitation to witness how it’s done properly was an offer far  too good to turn down.

The Outsiders are a really friendly bunch, and I was made to feel welcome from the start. This play features 8 actors:

The evening started with Director Barbara Springthorpe running through a short list of points that were made from the previous Sunday’s rehearsal, mainly centred around the subject of props, and where things should be placed. With these recommendations made, the rehearsal began.

The play is set in 3 bedrooms, now obviously there’s no way to rehearse in beds at The Quaker Barn, so the actors had to improvise by laying down on rows of chairs, but that didn’t detract from the quality of the acting on display, and it wasn’t too much of a stretch of the imagination to visualise how it’s going to work on stage at The Coronation Hall.

There were times during the evening when I genuinely laughed out loud during the performance, and had to keep the volume down so not to distract the actors. Some of the scenes featuring Nick and Trevor that I witnessed in Act Two are absolutely superb (as were the performances of all the cast). Although it is a comedy, there are moments during the play that are more serious, there’s jealousy, mistrust and the deterioration and rebuilding of relationships.

The Ulverston Outsiders are an amateur dramatic society, but I certainly didn’t see anything amateur about the way they’ve prepared for this production. I didn’t realise just how much work, effort and attention to detail goes into a production like this. Due to the nature of the play, scenes jump from room to room, but the actors are slick, well versed and polished, there may have been the odd slip up, or line not read exactly right in rehearsal, but to be honest if it hadn’t have been pointed out to me, I wouldn’t have known.

I left promising to return to watch the play in its entirety at The Coronation Hall the following week, having had a taster I just have to see the full production in all its glory. Hats off to the cast and crew, this is going to be a production you won’t want to miss!

So for a fantastic night of hilarity and fine acting, make sure you buy your tickets for  Bedroom Farce.

Well you’ll have to watch the play to find out, and believe me – you won’t be disappointed!

Bedroom Farce is on at The Coronation Hall from Tuesday 17th April through to Friday 20th April.

Not Another Fine Fest