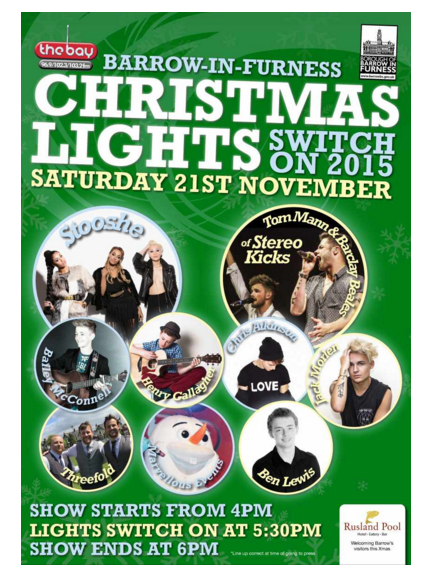 Barrow’s Christmas Light switch on is fast approaching. Make sure you keep Saturday 21st November clear, because this year’s switch on is going to be a fantastic event!

Taking place at Town Square, Barrow, the show starts from 4pm, with the lights being switched on at 5.30pm (with acts ending by around 6pm)

This year’s show promises to be bigger and better than ever with an impressive line - up of acts including:

Stooshe – Headliners for the event, their new single ‘Lock Dow’ is released this month, and they’re also working on their 2nd album.

Tom Mann & Barclay Beales – You might recognise these guys from 2014’s X Factor where they performed as part of Stereo Kicks.

Henry Gallagher – No stranger to The Bay Stage, this young man was a star on Britains Got Talent earlier this year.

Jack Molem – A solo artist and former member of the pop band Everyoung.

Chris Atkinson – This Yorkshire singer songwriter performs his set on The Bay Stage this year.

As well as the fantastic singing talent on display, there will be some wonderful family entertainment onstage this year with the team from Marvellous Events including the princesses, the snowmen and more!