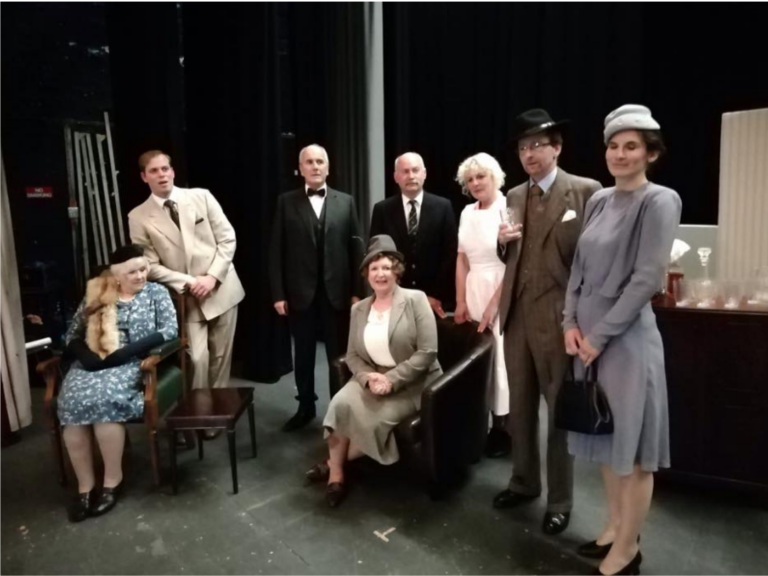 And the Outsiders certainly didn’t disappoint as they made a triumphant return to The Coronation Hall with their opening night performance of Agatha Christie’s masterpiece ‘And Then There Were None.’

Duncan Lindsay took to the Director’s chair for the first time to bring one of Christie’s most intriguing murder mysteries to life.

Eight strangers are invited to Soldier Island by the elusive Mr. and Mrs. U. N. Owen.  Upon arrival, the guests are met by the mysterious butler and housekeeper, Mr. and Mrs. Rogers, with assurances that the hosts will be arriving the next day.

That evening, a seemingly disembodied voice accuses each of the ten strangers of a specific murder.  Shortly afterwards, one guest chokes to death in front of everyone.  Was it an accident, or something more sinister?  Either way, it’s just the first death of many.

As the hours tick by with no help from the mainland and the death toll quickly rising, it becomes clear to the survivors that there is a murderer among them.  One bent on enacting their own form of justice for the skeletons in the strangers’ closets.  The events take a sickening turn when the survivors realise that each death is being orchestrated to match a mysterious rhyme that is framed above the mantelpiece.

Opening night saw a great turn out for the Outsiders Spring production. If there were any opening night nerves from the cast, then they certainly didn’t show. The months of hard work and preparation were evident as Christie’s tour de force played out in front of the large audience.

The Outsiders cast and crew are masters of setting the scene and creating atmosphere and from the moment the curtain was pulled back the audience were transported from The Coro to the isolated mansion atop Soldier Island.

From Adam Atkinson’s solid performance as the bold and resourceful Captain Lombard to the impressive Claire Boulter’s portrayal of secretary Vera Claythorne, the whole cast played their part in what was an incredibly well executed (no pun intended) production.

The casts timing and delivery of lines was excellent, their movement, the subtle interactions and use of props all helped to really set the tone and increase the growing feeling of unease, tension and terror.  The early scenes when all the guests are gathered together really impressed me, and as the tension built and the body count rose I couldn’t help but be absorbed by the whole production.  It was absolutely riveting.

Whodunit? – Well this review is a spoiler free zone, so if you want to find out then I suggest you book your tickets and see for yourself, you won’t be disappointed!

And Then There Were None runs from Wednesday 8th May 2019 through to Saturday 11th May, inclusive at The Coronation Hall.