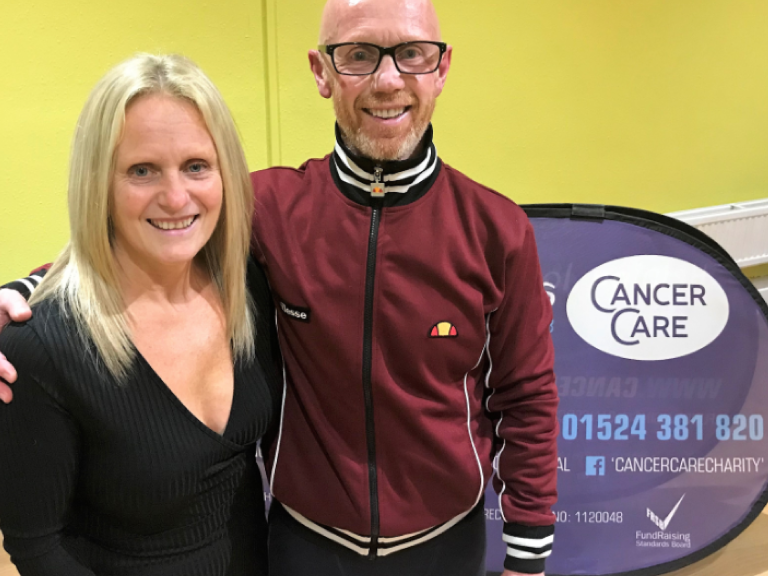 Steve Cody, a personal trainer is raising money and awareness for CancerCare by doing 365 days of the Cha Cha Slide plank.

“I was inspired to take on the challenge after seeing how much my sister, Andrea, benefitted from the support that CancerCare offers.

I was initially aiming to fundraise £250, however now only a couple weeks into January I’ve almost met that already!”

Steve’s love of fitness came from the army, where he was a physical training instructor for 13 years. After this he studied exercise science, and became a full time personal trainer and fitness instructor. His job has taken him many places, and he was even personal trainer for Mel B of the Spice Girls for 6 years – spending extensive periods of time in America with her.

“My aim was to raise both money and awareness of CancerCare in general, so people know what services are offered, who it’s available to, and where CancerCare operates”.

Steve’s sister Andrea, who lives in Lancaster and works for CancerCare as a Volunteers and Engagement Officer, said: “When Steve told me he was going to do the challenge I’m not sure I believed he was serious, it’s a huge commitment!

“He had helped to raise £100 last year with his circuits group doing the Cha Cha Slide plank and he wanted to do something else for CancerCare and this is what he came up with.

“I have struggled such a lot in the past after my treatment and surgeries for breast cancer.

“I had put some weight on and become unfit so I turned to my brother for his help and advice. He has helped me to get to where I need to be physically and emotionally and I am now back umpiring netball at a high level.

“I have a lot to thank him for and now he is raising money for CancerCare he is not only showing me how to live well and be healthy, but is also funding and helping other local families with support. I could not be more proud of him. Thanks Steve!”

You can find videos of Steve in action on CancerCare’s Facebook page:https://www.facebook.com/CancerCareCharity/

Any Individuals or groups wishing to do the Cha Cha Slide plank with Steve can do so by either contacting CancerCare atmarketing@cancercare.org.uk or messaging Steve directly on 075 234 214 37