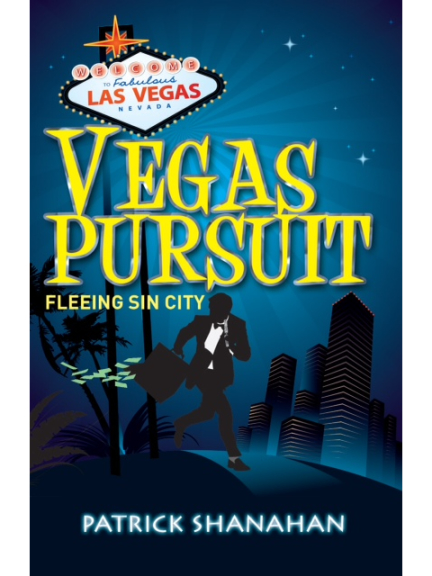 What happens in Vegas… Follows you home.

Local Wimbledon author, Patrick Shanahan has treated us to a follow up of his ‘love pursuit’ novels with Vegas Pursuit.

At this very apt time of year, we thought we’d give this love novel an airing!

Main character of the series, Matthew Malarkey is embarking on another hilarious journey across the pond in the big US of A.

Patrick Shanahan’s most recent novel, Vegas Pursuit (Fleeing Sin City), is the sequel to the hilarious Cupid’s Pursuit and once again follows the misadventures of his central character Matthew Malarkey.

Set in the city of Las Vegas, Vegas Pursuit is a contemporary ‘lads on tour’ story that unfolds around the simple desire to celebrate a big birthday.

But when Matthew unintentionally finds himself in possession of half a million dollars of somebody else’s money and his best friend, Cecil Delaney, then loses it, the trip turns into a nightmare of confusion and panic.

Pursued by a number of shady characters and distracted by the glamorous ladies of Sin City, Matthew finds himself in a race against time, gambling with a much bigger stake than he had expected – his life.

Patrick’s main aim with the Pursuit titles is to inject some fun into a world of serious books and create light, undemanding tales that will appeal to an audience looking for a fun read.

With Vegas Pursuit, the author moves away from the ‘romcom’ elements of Cupid’s Pursuit through a number of twists and comical situations that will appeal to both male and female readers alike.

Although a keen scribbler and story teller, Patrick only began writing seriously in the last few years.

He currently lives in Surrey and is writing a third book in the Pursuit series, Diamond Pursuit, which is scheduled to appear in the late Spring of 2014.