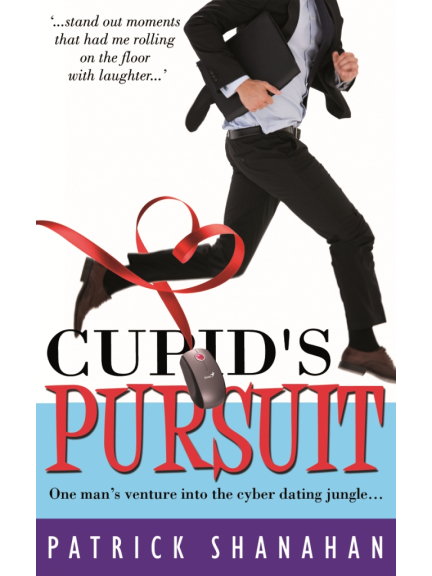 Cupid’s Pursuit – One man’s venture into the cyber dating jungle.
‘Relationships only ever end up in one place – Tesco’s’
Local Wimbledon businessman and author Patrick Shanahan takes the male viewpoint of finding love on the internet in his new book, Cupid’s Pursuit
The book with a humorous approach to the world of internet dating has proved to be a hit on Amazon. Fictional novel Cupid's Pursuit tells the story of the central character's dating adventures and is written from a man's point of view.
The debut novel by Patrick Shanahan has been read by hundreds and delighted fans have consistently rated the book as an outstanding 5-star read.
The story focuses on the central character, Matthew Malarkey, a marketing manager for a health and fitness company, who has been unlucky in his quest for love. Following the breakup of his marriage he has searched in vain for a new relationship. Encouraged by his good friend Cecil Delaney, he indulges in a hectic social life, trawling bars and clubs, but with no success in finding that special connection.
Cecil, a straight talking, cockney Londoner who loves to party, suggests that Matthew tries the world of internet dating. Matthew, at first reluctant, signs up on-line and embarks on a series of dates in his search for a soul mate. Through a combination of misfortune and his own bad decision making, each of Matthew's encounters go badly wrong, one situation impacting upon another until he finds himself on the wrong side of the law. In an attempt to extricate himself from his difficulties, Matthew invents a dual identity for himself and hopes that his problems will just go away. However, the law is not so easily put off and eventually he has to enlist the help of one of his dates to try and resolve his predicament.
Patrick Shanahan draws from his own life experience in writing his debut book. Having sampled the cyber dating world first hand he realised it was all being taken very seriously, often missing a relaxed and light hearted approach. Giving vent to a secret desire to write, Patrick’s aim with Cupid’s Pursuit was to present the humorous side of internet dating whilst observing this complex world from the male perspective.
Patrick is currently writing a follow up novel with a release date scheduled for January 2013.
Patrick’s book can be viewed at Amazon by clicking   HERE
Or visit the Cupid’s Pursuit website:  http://www.cupidspursuit.co.uk/
‘An extremely humorous insight into the world of internet dating…..’
A brilliantly written book highlighting the perils of internet dating, soooo funny, laughed out loud throughout the book…’
‘A laugh out loud take on a man's dating challenges….’
‘When I thought that Matthew's latest encounter couldn't be topped, it was & made me laugh out loud each time….’
More