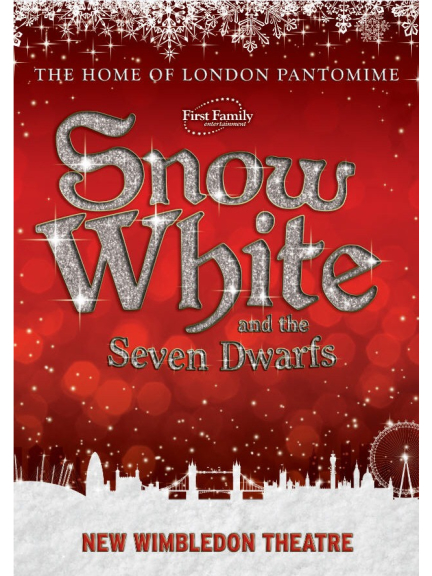 New Wimbledon Theatre and First Family Entertainment follow in their tradition of ground-breaking pantomime casting by announcing the biggest and most exciting line-up to date for Snow White and the Seven Dwarfs.

The Home of London Pantomime will be host to the actress Priscilla Presley making her pantomime and London stage debut as The Wicked Queen, joined by film and TV star Warwick Davis as Prof and funny man Jarred Christmas who also makes his pantomime debut as Herman the Henchman.
Priscilla Presley, who is best known for co-starring with Leslie Nielsen in the Naked Gun Series and for her role as Jenna Wade in Dallas, the most successful primetime soap opera of its time, says:
“I am so delighted to be making my pantomime debut in Snow White and the Seven Dwarfs. I have heard such wonderful things about British pantomime; the script is hilarious, my costume is sensational and I can’t wait to get started and give the people of London my Wicked Queen! What a wonderful honour to be spending Christmas in such a beautiful city and be a part of this festive family tradition”.
Warwick Davis was most recently seen as himself in TV sitcom Life’s Too Short, written and directed by Ricky Gervais and Stephen Merchant. He is best known for his roles in Star Wars Episode VI: Return Of The Jedi and the Harry Potter films and returns to New Wimbledon Theatre after five years.
Jarred Christmas will be playing the role of the Henchman. Jarred is an award winning comedian, and has been seen on Let’s Dance for Comic Relief, Mock the Week and 8 Out Of 10 Cats.
Kevin Wood, Chief Executive for First Family Entertainment said, “I thought it couldn’t get better than David Hasselhoff and Pamela Anderson and then along came Dame Edna Everage. But this year we have scooped the jackpot; it’s only Priscilla Presley, Hollywood royalty, TV icon and the wife of the King of Rock n Roll, Elvis Presley. Priscilla will be making her London stage debut in Snow White and The Seven Dwarfs here at New Wimbledon Theatre. As if that wasn’t exciting enough co-starring with Priscilla is Warwick Davis as Prof the chief dwarf. Joining our two megastars is the up and coming comic Jarred Christmas as Herman the Henchman. This show is going to be the best yet!”
Snow White and the Seven Dwarfs is a dazzling fairytale of a pantomime guaranteed to melt everyone’s hearts; watch as the beautiful Snow White and her seven little friends attempt to defeat the Wicked Queen. Will Snow White meet her Handsome Prince and save the day? Featuring spectacular sets, sparkling costumes, sensational songs, dazzling dance routines and bags of audience participation Snow White and the Seven Dwarfs is guaranteed to be full of wonder and fun to delight audiences of all ages.
The details...
Date:   Friday 7 December 2012 to Sunday 13 January 2013
Ticket Price:   £10 - £29.50 (premium seats available)
Book online: http://www.atgtickets.com/wimbledon
Telephone Booking:   0844 871 7646
Groups Bookings:   0844 871 7696
Access Bookings:   0844 871 7677
More