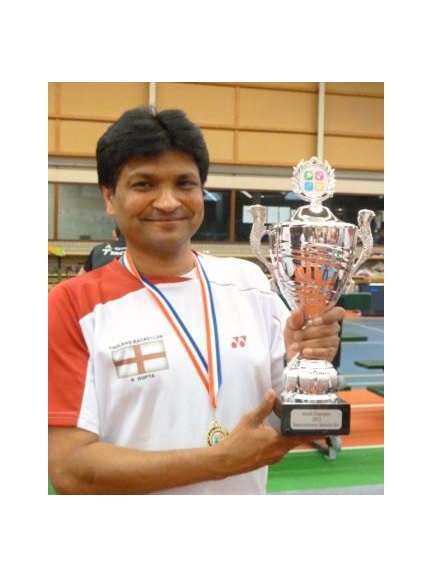 Racketlon - which consists of 4 racket-sports - arrives in Wimbledon! Rakelton promotes a healthy, active and social lifestyle.

Wimbledon Racquets & Fitness Club’s own Racketlon Champion, Rakesh Gupta who tells us all about this mostly unknown sport...

Racketlon consists of 4 racket-sports, table tennis, badminton, squash and tennis one after the other.

How did you get involved with the sport?

Through a friend but I realised that I not only needed a lot of work on my two new sports (squash and tennis), but also in my regular sports (table-tennis and badminton).

What is your current World Ranking?

I was top 5 in the world rankings in the Men's Over 45's for about 4 years, but now dropped to number 11, as I have not played many tournaments. Last year I became a double world champion (Men's Over 45 team and mixed doubles) and that has really kept me going at a time when I was thinking about retiring from competition.

How often do you train and how do you split up the sports?

There are not many places where you can play all 4 sports and it's even harder to find players to play against, so I train for all 4 sports individually.

Which is your strongest sport?

Badminton - I was in the top 20 in England in the open age category, and have played in the Over 40's in the European and World Championships. Surprisingly, I came 2nd in the National Vets (Over 50's) a couple of months ago.

How often do you play in tournaments and where do they take you?

There is a UK tour and a World tour, so there are events every couple of weeks. When I first started about 5 years ago, I went abroad a lot, I went to Bulgaria, Netherlands and Sweden last year. This year, the singles World Championships is being held in Surrey for the first time, and so I'm looking forward to that.

How has Wimbledon Racquets aided your training?

The club has been the key to my training, especially with the recent addition of a table-tennis table which can be used off-peak in one of the squash courts. I was a member of the badminton section for 10 years and had never been upstairs to the squash courts! Now, it's almost the other way around!

How can someone get started in Racketlon?

The best way is to enter a tournament locally (there are lots in and around the London area). Have a look at www.englishracketlon.org/

What keeps you motivated?

I have always played sport competitively and found it an enjoyable way to keep fit.

When I had a serious knee injury, I needed to have an operation which put me out for 3 years. When I restarted training, I discovered racketlon and the challenge of learning 2 new sports (squash and tennis) kept me going. I was hopeless when I first started, but then worked my way up to the top 5 in the world winning the Finnish and Dutch Open, as well as the English Championships (all in the Vets categories)

Why did you join Wimbledon Racquets in the beginning?

I tried lots of centres locally but was not happy with them  then I discovered Wimbledon Racquets and I realised that it was worth the long journeys getting there, as the facilities are world-class. So, I initially joined for badminton, but now play squash and table-tennis too - just waiting for you to get some tennis courts in next!!