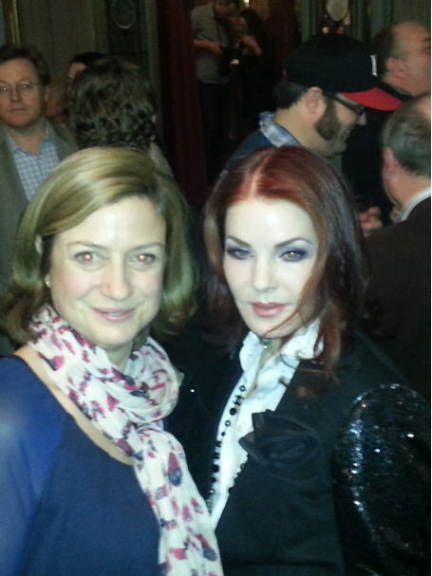 Priscilla Presley has won rave reviews for her star turn in Snow White at New Wimbledon Theatre, with critics hailing her as a "splendidly glamorous villainess".
The former Dallas and Naked Gun star is playing the Wicked Queen in Snow White at the New Wimbledon Theatre, and she has been praised for her performance after the curtain went up earlier this month.
I was fortunate enough to meet Priscilla at the after-show party on the 13th December - thank you for your kind invitation New wimbledon Theatre! - and rather surprisingly I found myself having a relaxed and leisurely chat with her. She openly admitted that, prior to signing up for the pantomime, she had no idea what a pantomime performance was and what it entailed. When presented with the script she didn't quite understand what it was all about... specifically the audience interaction, the cheering and the booing, and the ad lib opportunities. "What's that all about?" Prescilla exclaimed.
But now that she's in full panto flow she's suddenly become a devotee and a true fan of the genre. She rather girlishly giggled and confessed to me that she had, during that very evening's performance,  thrown in a couple of impromptu ad libs. I immediately knew exactly which ones she referred to, as they were so well delivered with perfect intonation and timing, that you would think Priscilla was a seasoned panto veteran.
It was such a pleasure meeting this charming and gracious hollywood royalty - and now with a pantomime villainess added to her CV.
The picture above shows Priscilla with my guest at the performance, Isabel Hargreaves, Director of Sales and Marketing at Cannizaro House.
Here's a selection of what some critic's have said about Priscilla presley's performance:
Charles Spencer, of The Daily Telegraph, wrote, "I can't say I held out much hope for Priscilla Presley... (but) she entirely confounded my low expectations. As the Wicked Queen she performs with fizzing confidence... whipping up the audience into a storm of boos with gleeful malevolence... Presley's a splendidly glamorous villainess."
The Guardian's theatre critic Lyn Gardner added, "Presley has apparently never appeared on stage before, let alone in panto, and initially it looks as if she's going to fall flat on her face... But then something curious happens. The wickeder the Wicked Queen gets, the better her performance becomes... Presley certainly earns her fee."
Henry Hitchings, of the London Evening Standard, said, "This year's Snow White features Priscilla Presley, whom I last saw act in the Naked Gun films when I was in my teens. It's her panto debut - oh yes it is - and she takes to it with a real sense of fun, savouring the opportunity to be playfully wicked. She doesn't even seem baffled by the copious local references."
Snow White with Priscilla Presley is showing at the New Wimbledon Theatre until Sunday 13th January 2013, with some tickets still available for many performances. You can check availability and purchase tickets by following this link   HERE
More