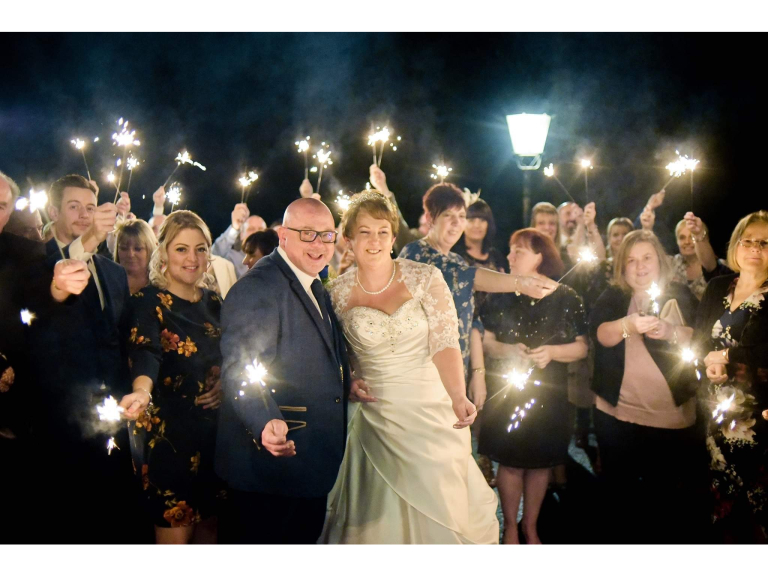 Jeff and Linda Manley, from Hollinswood, Telford, rolled up at the Best Western Valley Hotel in Ironbridge with Jeff thinking he was going to be best man and Linda chief bridesmaid as their friends Derek and Toni renewed their wedding vows - but Linda had other ideas.

Unknown to Jeff, Linda, 55, had been secretly planning the whole event for more than six months so she and her husband could renew their vows after eight years of marriage and have the complete wedding package they had missed out on first time round.

Linda wanted the whole thing to be a surprise for Jeff, just two days before his 56th birthday, and was so successful that the role-reversal cover story was kept intact until about 10 minutes before the ceremony took place.

“We got married at the old Wellington Register Office eight years ago and, don’t get me wrong, we had a great time but we were not totally happy with parts of the day like the dress and suit and so on,” said Linda.

“I just thought it would be really nice to do it again at a proper venue with a top photographer and proper wedding breakfast. We weren’t really in a position to have the sort of wedding we wanted first time around.

“Jeff lost several family members recently and it seemed like we were only meeting up with people on very sad occasions so I thought it would be nice to do something positive.

“I woke up on May 1 and made the decision to arrange a great day when we could renew our wedding vows and share it with friends and family. I also thought it would be nice for it to come as a surprise for Jeff.”

The couple went on holiday to Ibiza in June with Toni and Derek who helped create the cover story by saying they were going to renew their wedding vows and asked Jeff and Linda to be best man and chief bridesmaid - a ploy needed to get an unsuspecting Jeff to the Best Western Valley Hotel in Ironbridge on the day.

“I had to remember that I was the bridesmaid rather than the bride in any conversation we had and the only time I really panicked was when Jeff wanted to get a pocket watch engraved with: ‘Derek groom’, ‘Jeff best man’ but I managed to steer him away from that,” said Linda.

“All the wedding paraphernalia had to be stored at Toni and Derek’s house, all phone calls were diverted to Toni and all the planning and creative stuff was again done at their house as I couldn’t risk Jeff finding out anything.

“I had to ask his manager to give him time off to be ‘best man’ and also got in touch with Stoke City - Jeff’s pride and joy - who sent a letter of congratulations.

“We had 53 guests at the wedding, friends and family, and everyone including guests, suppliers and the hotel managed to keep the whole thing secret. I’m so proud of them all.”

Jeff added: “There were more than 50 people involved in the secret - it was incredible. I was convinced that I was best man up to 10 minutes before the service. I walked into the room, saw all the people and thought wow this is great, it’s going to be a great party. I was so excited and saying so lovely to see you all.

“Paige from the Valley Hotel gave me some cufflinks and said we have a surprise for you, you need to read this. Linda’s inscription on the one read: ‘The day we met we had love and laughter’, and on the other: ‘Meet me at the altar for a happy ever after”.

“I really didn’t know what was going on. I said to Derek: ‘Are you ready to meet your bride?’ and he said: ‘No, mate, this is your day. I was so shocked it was unbelievable - an amazing day, faultless, everything was just right it was so nice to get exactly what we wanted and the staff at the Valley were brilliant.

“It was a great day and a wonderful experience. Linda did a tremendous job in arranging the whole thing and I can’t believe she was able to keep it a secret - it must have been very difficult.”

Lisa Snape, marketing and sales manager at the hotel said: “It was a wonderful event to be involved with.

“Jeff was really shocked and all of our staff pulled it off perfectly. We wish them both the very best wishes for the future.”

Lind added: “It still hasn't sunk in the enormity of what I actually achieved all in secret, from suppliers, the men choosing their suits (with Jeff thinking he's best man), the flowers, wedding fayre, choosing the venue, menus, save the date, invites, the list goes on.

“I'm still filling Jeff in on all the fibs - for example when he thought Toni and I were ‘just having a girly day’ we were racing round booking the Valley and choosing my dress!”

The couple, who renewed their vows last month before the Christmas festivities took hold, are now planning a mini-moon in Edinburgh next month. (February)

Is it time to review your ISA savings?

Sports, dance and arts & crafts fun this half term
Sign up for offers
Sign up for what's on guide
Become an author
Popular Categories