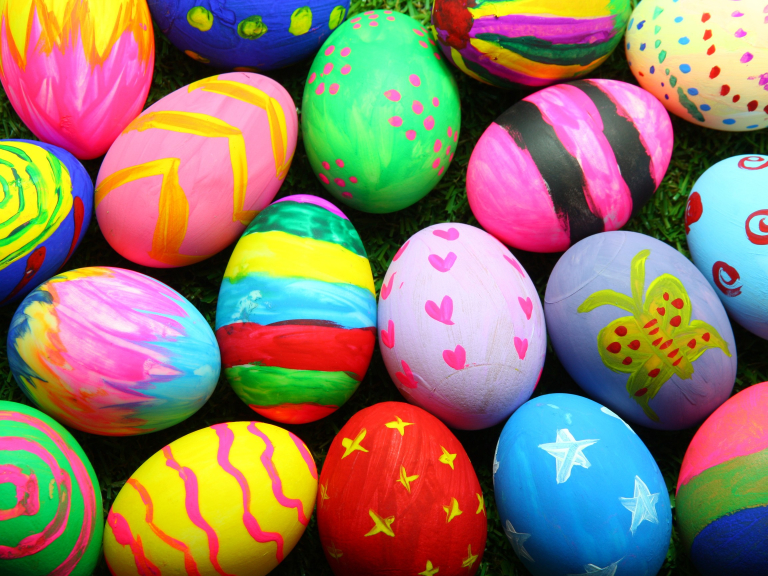 They’re sweet, indulgent and 90 million of them are sold in the UK every Easter, but where exactly does the tradition of eating chocolate eggs come from?  Read on, as we uncover the origins of the humble Easter egg.

The custom of decorating real eggs stretches back hundreds of years and can be found in many cultures around the world. Africa is home to the oldest example; a 60,000-year-old Ostrich egg!

Christians in modern day Iraq and Syria were the first to give each other eggs at Easter, often staining them red to symbolize the blood Jesus shed. From here, the giving of Easter eggs spread to Russia and Eastern Europe via the Orthodox church.

The tradition of giving eggs was also a huge part of the pagan Spring festival, which celebrated new life and fertility. Because the Spring equinox takes place just before Easter, this ancient custom became part of Easter celebrations. Eggs were forbidden during Lent, so when Easter Day arrived, Christians would celebrate by eating as many as they liked. The empty eggshells came to represent the empty tomb.

In the 19th century, the first chocolate eggs appeared in France and Germany. Made from bitter dark chocolate, they were extremely solid and hard. However, developments in chocolate making led to the creation of the first hollow eggs at the end of the century. These became a popular but pricey sweet treat.

The first British Easter egg was made in 1873 by Bristol-based chocolatier J.S. Fry & Sons. The company eventually merged with Cadbury’s, which launched its first Easter egg in 1875. Made from dark chocolate, this contained a mixture of small sweets.

Cadbury’s earliest eggs featured plain shells, but they soon began to decorate them with chocolate piping and marzipan flowers. Eggs with patterned shells were then introduced by German chocolatiers who were keen to mask any imperfections.

Easter eggs were quite a luxury to start with, but the development of milk chocolate made them more affordable. In 1905, Cadbury’s finally introduced their famous milk chocolate egg.

Of course, it’s not just chocolate eggs that play a part in Easter celebrations. Hard-boiled eggs also feature in many traditional Easter activities such as egg rolling, egg hunts and egg blowing. So if you’re celebrating Easter in Sutton Coldfield, why not check out the some of the local events that are taking place?

If you’ve got children, Sutton park’s “eggciting” Easter Egg Trail will keep them busy on the 30th and 31st March. There’s also an Easter egg hunt and an Easter themed fancy dress competition at The Donkey Sanctuary on 24th March from 11-1pm. And if you book a table for the Ramada Hotel’s Easter Day lunch, a post dinner Easter egg hunt is included.

As a copywriter and freelance journalist, I write website content, blog posts and articles for businesses of every size. Whether I'm writing for a well-known brand, a small local business or a magazine,...

Football club to host community day
Sign up for offers
Sign up for what's on guide
Popular Categories
By clicking 'ACCEPT', you agree to the storing of cookies on your device to enhance site navigation, analyse site usage, and assist in our marketing efforts.
For more information on how we use cookies, please see our Cookie Policy.