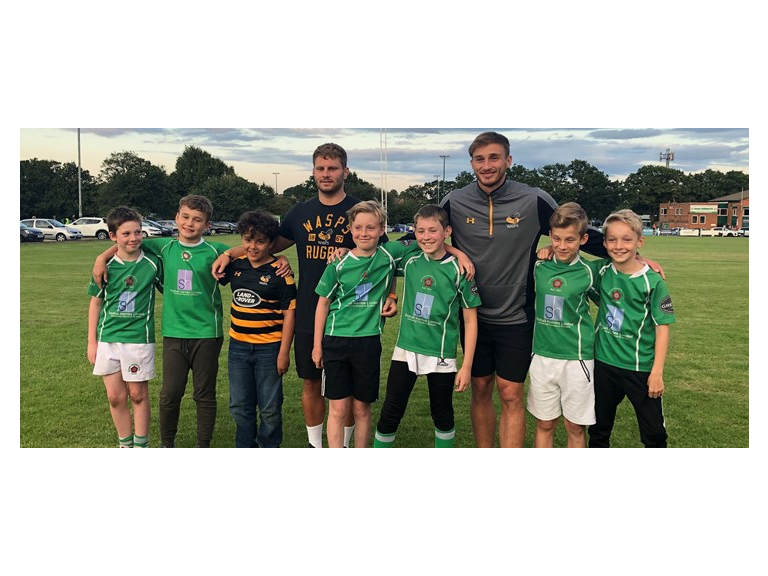 Sutton Coldfield Rugby Club’s players have got their season underway alongside two stars from Wasps.

Sutton Coldfield got their new season underway at home to Rugby Lions last month, while Young and Bassett are ramping up preparations for Wasps’ opening match against Saracens at Ricoh Arena on Saturday 21 September in the Premiership Rugby Cup.

“Having players of Thomas’ and Josh’s stature training with us will live long in the memory for a lot of our players, and will hopefully spur them on for the coming campaign,” said Joe Gavin, head coach at Sutton Coldfield Rugby Club.

“It was a fantastic opportunity to hear about how things are done at an elite level with regards to preparation and recovery after a game, as well as some pointers on how to develop slick passing moves on the pitch.

“All of the players were really engaged with what they had to say and we’d like to thank them for taking time out of their schedules to take a session with the players.”

The player visit is part of Sutton Coldfield Rugby Club’s growing relationship with Wasps, which has also seen the club take hundreds of adults and children to Ricoh Arena for a Wasps game to meet players, and form a guard of honour on the pitch.

Bassett added: “Grassroots clubs such as Sutton Coldfield are essential to the long-term development of the game and producing the next generation of players and supporters, so this was a great way of personally giving something back.

“The start of the season is both challenging and rewarding in equal measure with a gruelling mix of weights, running and following a strict diet before even touching a rugby ball.

“We gave the players an insight into what life is like during pre-season at elite level and hopefully we have given them some new training methods to try out as they get ready for their own season.”

Tickets to Wasps’ Premiership Rugby Cup clash against Saracens at Ricoh Arena can be purchased by visiting www.wasps.co.uk