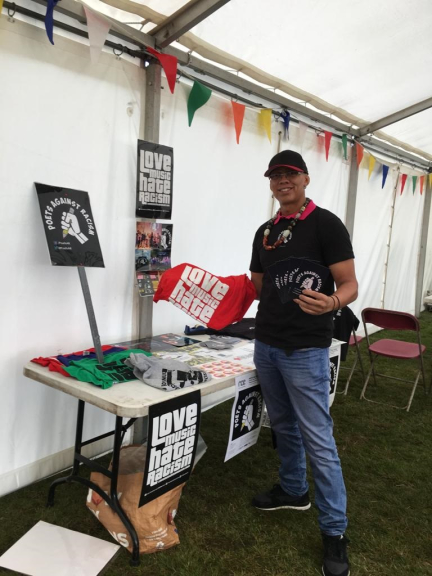 The day began with artists of all kinds gradually gathering in groups of numbers in certain sections of the Barr Beacon field as they arrived at their designated sound stages. Equipment setup and sound checks dominated the buzz of activity whilst in the middle of the field I noticed a small gathering of people with black t-shirts and placards saying 'Poets Against Racism'. "Hello Kurly!" was the welcoming call from Ian Henry and Manjit Sahota, founders of PAR. After further exchanges of welcome amongst poets present we headed for our tent, Stage 3, a nice comfortable tent complete with bar, tables, chairs and professional sound stage.    Numbers of poets began to swell over the next 30 minutes whilst Ian ran down the checklist of names due to perform. "Its a full turn out, all the poets are here!" which was a further good sign that things were going to plan! During this time I floated about with my phone camera capturing comments from poets and performers. Comments ranged from "Numbers of the far right in this country have reached levels beyond that of the 1930s... It's important that we spread the messages of unity and love..." to "....I've written some new material and I want to test it out here with a different audience" and everything between - from the importance of creating social impact to the exploration of artistic self enquiry. The video can be seen here: https://youtu.be/FXC8vZu38Ro
I began my set on the topic of something familiar by someone familiar, a love poem by William Shakespere called Sonnet 18 which I rap and add a second verse, based on Shakespeare's original verse but translated in todays 'modern' English and finished with a poem about 'Words'.   Shortly after my piece the Main stage close by really started to get going and easily dominated the sound space all around - including inside our delicate poetry tent. As with all things like this the best thing is to adapt to the situation as best as possible. The poetry audience beckoned closer to the stage to hear the poets as best they could, taking seating from the front row in a bid to hear words from each of the poets with the back drop of Status Quo to fill in the pauses in-between.   As the hour of poetry went on and poets went on and off the stage, an atmosphere of keen listening and warmth became more and more established, with a firm audience at the front followed by the attention gathered by the queue of festival goers waiting to be served at the bar further at the back.   With a rousing closing cheer for all involved, the hour of Poets Against Racism was over, that is, until the following day where they performed again!