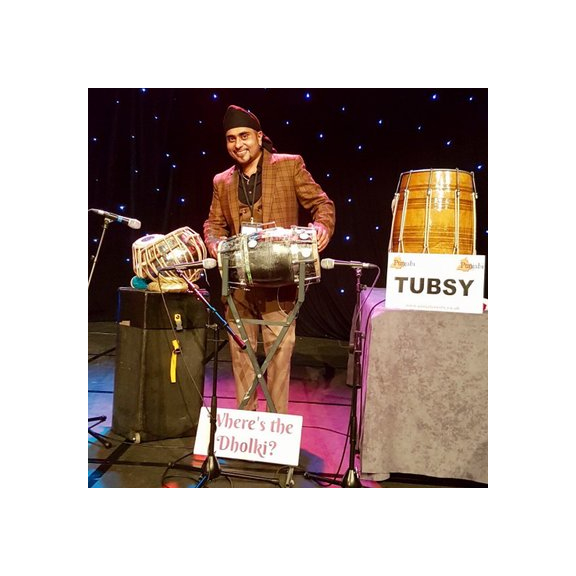 He has a photo of when he was 1 year old trying to reach either side of a Dholak (Formal name of the dholki), where he can safely say his interest in music started at an early age. Tubsy comes from a family of musicians his father and Guru -Teacher LATE SHRI PAKHAR SINGH JI was a Dhadhi (member of the Dhad sarangi band-singing and playing small barrel shape percussion instrument), playing the Dhad sarangi style of music.

His elder brother SITAL SINGH (FAMOUS FOR HIS DHOLAK GROOVE ON A.S. KANG Track GIDHIAN DI RANI) is a very highly regarded Dholak player and was also one of the 1st Dhol (Large Barrel shaped instrument) players in the country as he started a bhangra group called the Saathies bhangra in 1968/9. Having both his dad and brother as his strongest influences his playing is a very strong Punjabi folk orientated.

Tubsy started playing dhol at the age of about 9 but was already playing Tabla at the local Gurdwara from the age of 6 and Dholak he has always been playing, but dhol came later His Dhol playing is self-taught , some of his dhol playing comes from the Dholak/Tabla playing, but most of it comes from my love for desi folk Punjabi music, language and dance.

The bands he has been a member of have been;

Coming back to the Bhangra Industry after being very ill with alcohol induced liver disease, pancreatitis gall stones and a “snake bite” was always going to be a bit of a challenge for Tubsy.

His friends and especially his family were not too keen on him going back into the alcohol fuelled wedding scene and back with the same musicians and band members with whom he once used to drink. Tubsy had a lot to prove, to his friends, colleagues and the whole of the bhangra scene but most of all to himself, HE HAD TO STAY OFF THE DRINK TO SURVIVE.

Over the years he has found that he has gained a lot more respect as a musician and he has progressed so much further in his art as a result of being sober and more focussed in his instruments.

He has also been able to market himself and has achieved so many big things which he says were never going to be possible if he was still drinking. Music is the most beautiful gift any one could ever receive or indeed give to anyone, this is a quote Tubsy uses very often and he is referring to the teaching and learning process of music.

He always recommends that people take the time out to learn an instrument both physically and to also research some of theory behind it too. The music industry is a very competitive market, “in order to get your place you have to know to play your instrument and also how to perform your instrument.” Attitude is another major factor “humility and respect should always be your two biggest attributes”