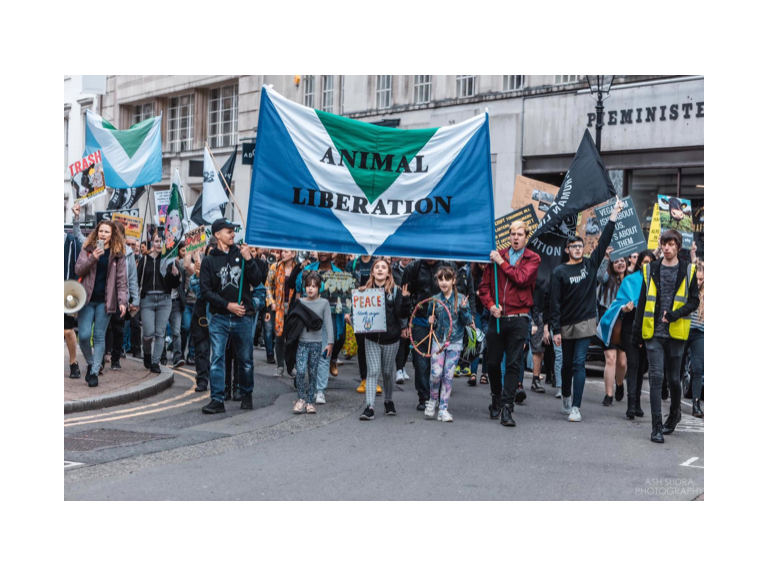 Let’s All Unite Globally To Spread The Vegan Message!   Donald Watson, who coined the word “vegan”, once wrote: “Can time ever be ripe for reform unless it is ripened by human kindness?”

While numbers of vegans have seen a great increase, particularly in recent years, we need to avoid complacency and always take note of the huge challenges ahead for all those wishing to see an end to animal abuse and speciesism, as we work tirelessly for animal liberation.

The UN Food & Agriculture Association states that by 2050 meat production is projected to increase by almost 75% and dairy consumption by 58%, fuelled by growing incomes and population growth (production of meat has already increased about 5 fold since 1961). Poultry consumption grew 12 fold between 1961 and 2014, and pig consumption more than 4 fold.   It was with a sense of urgency created by this situation that myself and Ronnie Lee put forward a new definition of veganism, in order to provide a sound philosophical basis for increased activism by vegan and animal rights groups and individuals across the world. This was adopted by the international Vegan Flag organisation in December 2017 as their official definition.

The definition will be used alongside the Vegan Flag itself, which has become the official international flag of veganism, to create a unified global movement to spread the vegan message.   When we announced the new definition on stage at the 2018 UK Vegan Camp-Out, it won approval from the entire hall, who stood to clap and shout their support for it.

The UK Vegan Society’s response was not so enthusiastic, however, with their spokesperson Dominika Piasecka stating in Plant Based News: “The founding members of The Vegan Society coined the word “vegan” back in 1944 and agreed its definition. The core meaning of veganism has remained the same for 74 years and we have no plans to change the definition as we feel it perfectly reflects what the vegan lifestyle is about”.

Dominika also complained that we wanted to “restrict” the meaning of veganism too much, so making people “unable to inspire others” to become vegan.   Aside from the fact that these last two points can not be further from the truth, the Vegan Society’s website itself states that the society did not coin a definition of the word vegan until 1951 (when Lesley J Cross became its President), almost seven years after it was formed.

There was, however, a small manifesto issued in 1944, where the first paragraph began with the words “to advocate” and the second with “to encourage”; a clear indication that the intention was to actively spread the vegan message.   When Lesley Cross left the Vegan Society’s committee in 1957, the VS amended the constitution, creating a third definition to emphasise health and diet, and removing all mention of animal rights issues. They have changed the definition at least 13 times over the years.

We see the Vegan Society definition of the word “vegan” as inadequate, in a number of ways, for the modern vegan movement, and the new definition seeks to put this right.   The VS definition concentrates purely on avoidance and what, as vegans, we do not do. This is merely a neutral position and what I call “self veganism”.   In light of the ever growing scale of animal exploitation, I feel veganism should mean more to us than simply what animal products we do not personally use or consume.

It must also be about what we should do in relation to other people. Contribution towards the mass vegan education of others is essential, if we are to have any hope of creating a world based upon compassion instead of violence.    Hence the inclusion of “a moral duty to actively oppose animal exploitation by encouraging and educating others to become vegan” within the wording of the new definition. After all, it is surely only vegans who can truly educate others to go vegan.

This is not restrictive as the Vegan Society appear to suggest. In fact, all vegans, no matter what their circumstances, are capable of making some sort of contribution, whether great or small, towards vegan outreach and advocating for all those who have no voice.    Excuses not to contribute mean nothing to the ever growing billions of suffering animals each year.

We also include a core objective in our definition: “the eradication of speciesism”, which is surely what we all want to see, in order for all animals to be liberated from human tyranny.

I hope all vegans, both as individuals and groups, will adopt the new definition and unite globally under the Vegan Flag to create a vegan critical mass and a surge of global compassion.

The full definition can be seen by visiting veganflag.org/veganism   Tony Harris