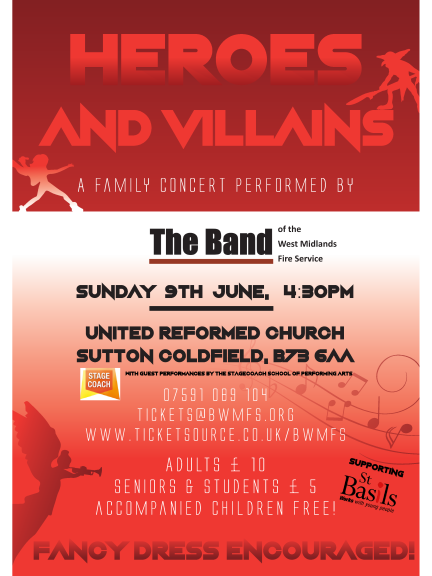 The Band Of The West Midlands Fire Service have been preparing once again to bring their renowned musical performance to Sutton Coldfield. Donning their leotards, capes and masks the band have been very busy practicing for their next big event: Heroes And Villains, a family concert inspired by the best baddies and greatest good guys film, television and stories have to offer.

The concert, taking place on Sunday 9 th June at 4.30pm will feature well-known tunes such as the fabulous music from Superman and some infamous melodies within a Disney Villains medley, plus many more besides. Famous puppets, caped crusaders and dangerous dragons may also make an appearance…

The band, whilst having fun performing in brilliant local venues such as The United Reformed Church of Sutton Coldfield will also be holding a retiring collection for their nominated charity of the year, St Basils as well as a raffle with some fantastic, locally donated prizes!

In addition to the wide range of music from the band, this year we have teamed up with the Sutton Coldfield Stagecoach theatre group who will be entertaining our audience with a performance of their own.

Tickets are just £10 adults, £5 for seniors and students and all accompanied children are free of charge! The band have been dressing up and would love to encourage our audience to do just the same and hope to see as many in fancy dress as possible! There will be an interval at the concert with refreshments provided.

So why not try something different on the 9 th June, and make your way to the Sutton Coldfield United Reformed Church at 4.30pm for what promises to be another astounding performance from The Band Of The West Midlands Fire Service.

Tickets are available online at www.ticketsource.co.uk/bwmfs  by telephone on 07551 089104, by email at tickets@bwmfs.org or on the door.