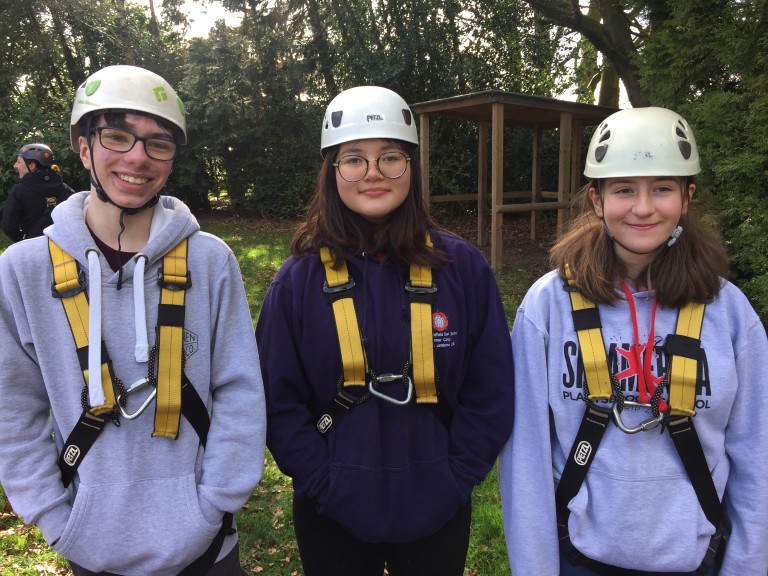 Three young Scouts from Sutton Coldfield are looking back upon their Scouting experiences after earning the highest award to Scouts under 14 years of age.

Two other young people from the 16th Sutton Coldfield Scouts, namely Carla Popon and Matthew Nicholls, also gained their Chief Scout Gold Award.  They have now moved up to an Explorer Scout Unit.

Eleanor Richardson`s elder brother and sister both previously earned their Chief Scout Gold Awards.  Her brother, Matthew, was presented with the only Chief Scout Platinum Award at the same awards ceremony. Matthew and Carla are 2 of 9 Scouts representing Sutton Coldfield at the 24th World Scout Jamboree in America later this year.

"My brother and sister are both Explorer Scouts" said Eleanor "and you could say I come from a Scouting family.  I wanted to become a Scout to do stuff like abseiling, camping. I have learnt to make a bivouac shelter with Birmingham Scout County in the forest of Dean even if it did fall down in the night!  I have really enjoyed my time in Scouting.  I have been on Ice Camp and Brumventure with Birmingham Scout County and made lots of new friends.  As part of Scouting I have learned the safe use of axe and saw, made fires and cooked my own food, done conservation work in the copse behind St Chad`s Church and volunteered at a youth group at St John`s Church in Walmley."

Eleanor believes that Scouting has taught her skills for life.  "It`s the little things", she said "like putting up a tent in the wind and rain, having to be cheerful on days when you`re feeling grumpy and tired so you don`t let people down".  She also described how she had learned teamwork and self-reliance using the skills she had been taught by her Scout Leaders at 16th Sutton Coldfield Scouts.  "I also learned about endurance", she said, "hiking when I was tired and carrying a big rucksack with miles to go and, at the end of it, having to put up my own tent and cook my own food".

In addition to Ice Camp and Brumventure Eleanor also represented Sutton Coldfield on the Jurassic International Scout Jamboree last year in Dorset where she met thousands of other Scouts across the world.  "I loved the foam party" she said.  "Jurassic was a week-long camp in a field with my friends.  We did lots of activities and went to Brownsea Island, the birth-place of Scouting.  I also enjoyed my Scout Expedition Challenge at Moira Furnace in the National Forest and skipping down a lane with my friends singing "We are off to see the Wizard, the wonderful Wizard of Oz!"

James Newbold-Comyns earned his Chief Scout Bronze when  he was a Beaver Scout, the Chief Scout Silver when he was a Cub Scout and now Chief Scout Gold as a Scout.  He has been having fun  and adventure in Scouting since he was 6 years old.  "I have made loads of friends" he said "and my Dad became a Scout Leader.  My Dad had been a Scout when he was young and he wanted me to have the same chances as him when he was young.  I have had the opportunity to do lots of fun stuff I would not normally do like abseiling."

James described a series of activities he has been able to do as a Scout: climbing, hiking, cycling, raft building on Powells Pool in Sutton Park,  making shelters in forests called bivouacs and sleeping through the night in a forest, making fires and cooking his own food which have led to various badges such as map reading, navigation, first aid, survival skills and air rifle shooting.  "I had a lot of fun when I went on the Jurassic International Jamboree last year", he said  "and played Jurassic Monopoly.  We had to make our own transport arrangements and explore towns like Weymouth on the Jurassic Coast in Dorset.  I have really enjoyed myself on camps such as Ice Camp and Bivouac with Birmingham Scout County and made lots of friends"

James has also volunteered his spare time to help the local community., With his brother Matthew (who earned the Chief Scout Silver Award) they have undertaken conservation work in the New Hall Valley in Sutton Coldfield.  "Looking back" said James "I just remember the laughter - laser tag and climbing on Ice Camp at Blackwell Adventure Centre, laughing all the time on the expedition challenge with my friends as we explored the National Forest and sang songs or competing in the Chase Walk last year across the beautiful Cannock Chase in the snow.  We hiked 13 miles using nothing but map and compass.  Our team was first back to base camp.  We earned the coveted Chase Walk badge and certificate.  Bivouac with Birmingham Scout County was incredible!  We had to hike 3 miles through forest to our campsite and cook over an open fire.  We also had to sleep in the forest all night in shelters we made for ourselves with only the skills we had been taught.  These are skills for life that will stay with me forever".

Grace Henery, like Eleanor and James, is from a Scouting family.  "My 3 elder sisters got their Chief Scout Gold Awards", she said "and I wanted one as well!"  Grace explained that she also enjoyed her Scouting experience, trying lots of new activities and making lots of new friends.  She has also participated in Birmingham Scout County`s Brumventure twice and Ice Camp three times.  Last year at Brumventure at Pike`s Pool near Bromsgrove she went on the mechanics` course to gain  her activity badge.  As part of her training she had to strip a car`s engine, clean it, identify all of the parts and put it back together again.

"It`s been a lot of fun!" she said.  "Who would have thought tying knots could be fun ?  I was in a team with James last year with 5th Sutton Coldfield Scouts for the Joint District Scout Raft Race on Powells Pool in Sutton Park.  We had to make our own raft and race it across the water.  Our team won 2 trophies that day!"

Grace also listed the expedition challenge with James and Eleanor as one of her best memories when they skipped down lanes singing songs in the National Forest and last year`s Jurassic International Jamboree in Dorset.  "We met lots of new people from different Scout troops", she said "from around the world.  We also went on day trips.  It was a week away from home in the summer.  I even got a tan!  It was really good!"

Sutton Coldfield Scouts are recruiting.  Flexible opportunities available  If you are interested in becoming an adult volunteer please email Ian Henery, Assistant District Commissioner for Development at ihenery@aol.com or go to https://suttonscouting.org.uk.