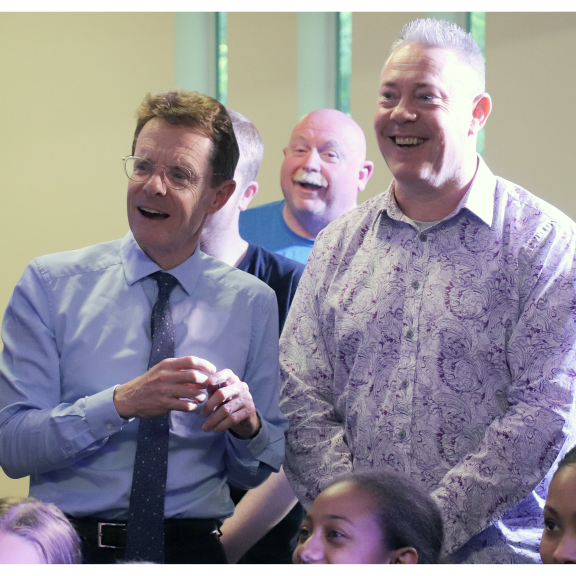 Talented Sutton drama students had a surprise VIP visitor as they rehearsed for a ground-breaking trilogy of plays about Birmingham’s Chinese community.

Mayor of the West Midlands Andy Street visited the youngsters at Stagecoach Performing Arts on Friday, June 28 after they raised hundreds of pounds for charity – and are now gearing up for the plays by local writer Ian Henery.

On June 9 the students performed with the Band of the West Midlands Fire Service in aid of charity St Basil’s, and then on the weekend of June 15 there were seven sold-out performances at the Midlands Arts Centre in aid of Cancer Research UK.

The students are now in rehearsals for the first of a trilogy of plays for China West Midlands 2020, which explore and deepen the connections between the West Midlands and China.

Mr Street said: “It is fantastic that students from Stagecoach Performing Arts are exploring the theme of ‘home' for China West Midlands 2020.

“For many people in the West Midlands home is in two places - where one was born and grew up, and where they are living and working now. I am committed to making every community feel at home in the West Midlands and projects like this really help to bridge the gap between different continents and cultures.”

China West Midlands 2020 hopes the project will convey a deeper understanding of mutual prosperity arising from cross-culture and cross-border collaboration, and will enable the West Midlands to grow trade and investment opportunity with China.

The first play in the trilogy was previewed at the Chinese Community Centre in Birmingham with Newhampton Arts Centre in Wolverhampton, Southside Business Improvement District in Birmingham, and the Birmingham Hippodrome all pledging their support.

The trilogy of plays for China West Midlands 2020 entitled ‘Home’ starts with a story based on the sacrifices of the Chinese Labour Corps during the First World War and continues with a second story around the 1940s and 50s with the third play set in contemporary Britain. The trilogy is written by solicitor, playwright, and poet Ian Henery.

The students of Stagecoach Performing Arts are working with Searchlight Theatre in Dudley and Blue Orange Theatre in Birmingham to stage the plays. Cultural partners are Chinese Active Citizens UK and the Birmingham Chinese Society. Corporate sponsors so far confirmed are Xin Marketing and Red Moon Brewery with additional support from Sheila Macey at Aldridge Photographic Society.

The students will also be working closely with the Birmingham Hippodrome in connection with activities they hope will be funded by a grant from Arts Council England.