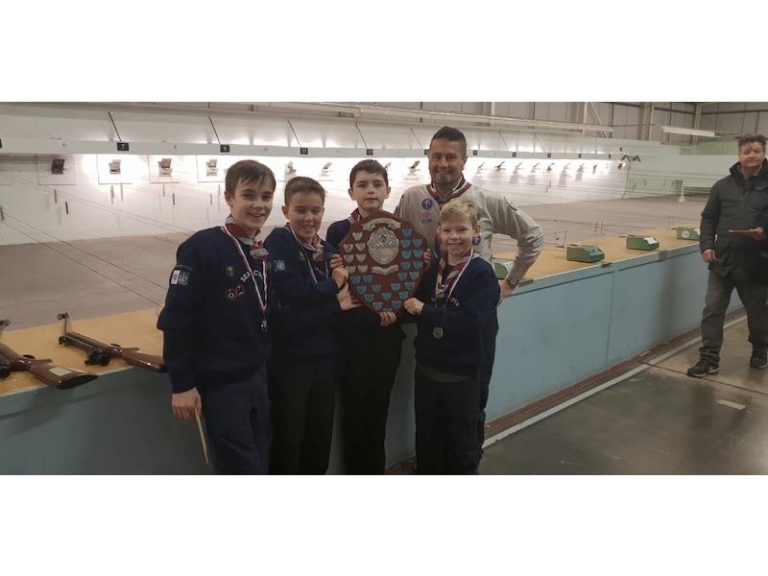 Sutton Coldfield Scouts "are on target for greatness" after scoring impressive results in a prestigious air rifle competition at the West Midlands Regional Shooting Centre at Aldersley Leisure Village in Wolverhampton.

"Many thanks to everyone who took part in the air rifle shooting competition", said Adam Hodson, Assistant District Commissioner for Scouts in Sutton Coldfield East. "We had a massive turn out of around 75 plus Scouts, Leaders, helpers and parents. I would personally like to thank you all for ensuring that the relevant forms and payment were completed, thus ensuring that the competition ran relatively smoothly".

"They will be competing against the best" explained Adam "from Birmingham Scout County. Our amazing young people will shoot against the best of the best from Bourneville, Acocks Green, Moseley, Handsworth, Great Barr, Kings Norton, Erdington and all of those other places within it`s borders. We`re shooting ahead, we`re raising our sights, getting fired up and on target for greatness".

The local District competition was run to determine who and what teams would represent the District at County level. "All of our activities are based on the principle that we need to provide activities that develop young people", said Adam, "and offer excitement but not danger, adventure but not hazard. We are all about fun, challenge and adventure. We are taking aim - and firing our way to victory".

The air rifle shooting competition is run in accordance with the rules in The Scout Association`s Policy, Organisation and Rules. Adam is keen to emphasise that all Scouting activities are run to high standards and well planned. "It is my role", he said "as Assistant District Commissioner for Scouts to support the District in the delivery of premium activities and programmes within Sutton Coldfield. We all work as part of a team and what we do is entirely voluntary. We expect good discipline and high standards from both adults and young people and most importantly everyone should have fun".

The core age range for the Scouts Section is from 10.5 - 14 years and the Scout Section programme is designed to be delivered to this age group. The Scout Association has grown from it`s first experimental camp in 1907 to an estimated 28 million members worldwide. In the UK alone there are over 499,000 boys and girls involved in Scouting. An increase in adult volunteers means that now more young people from all parts of the community can now take part in their own big adventure.

"The staff at Aldersley commented on the exceptional good behaviour of our Scouts", said Adam. "The scoring was carried out by members of the NSRA to whom we are very grateful. I am grateful to everybody who gave up their spare time to give our young people a chance to develop another new skill".

Note: If as an adult volunteer you would like to gain new skills, make new friends and be part of a winning team whilst having great fun too please email Ian Henery Assistant District Commissioner for Development at ihenery@aol.com or through the website www.suttonscouting.org.uk.

Football club to host community day
Sign up for offers
Sign up for what's on guide
Popular Categories
By clicking 'ACCEPT', you agree to the storing of cookies on your device to enhance site navigation, analyse site usage, and assist in our marketing efforts.
For more information on how we use cookies, please see our Cookie Policy.