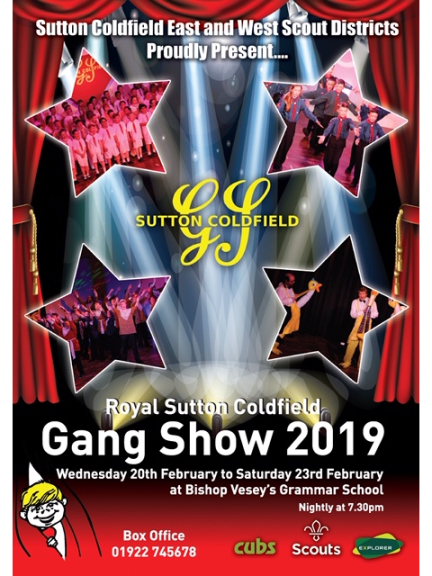 Every two years the biggest stage show in Sutton comes around. In just over a week the Royal Sutton Coldfield Scouts Gang Show will again be on at Bishop Vesey's Grammar School. (B74 2NH)

“The Sutton Gang Show is now in its fifty second year”, said Nigel Palmer, Chair of the Sutton Coldfield Scout Gang Show Committee. “Generations of young people and leaders have been delighting audiences since 1968!”

According to Nigel Palmer names like Gwilym Lee (Bohemian Rhapsody and Midsomer Murders to name a couple) first got the bug in this Gang Show. And just as importantly countless other young people have found their confidence. “Let's also remember”, enthused Nigel, “the thousands of people who have been in the audience having a great time.”

This year there is a cast of fifty six performers in the Sutton Coldfield Scout Gang Show. This includes eight Beavers who perform in the Saturday Matinee. “The show has something for everyone”, explained Nigel “from song and dance routines, comedy sketches and a moving tribute to some of Sutton's scouting leading lights who are no longer with us. The members of the cast have all shown extraordinary dedication and commitment and are incredibly talented.”

Scouting is inclusive and open to everyone and the current Gang Show is a celebration of diversity and inclusivity. “This Gang Show is run on professional lines” said Nigel “with months of planning and rehearsals and many people working behind the scenes to bring you the greatest show we can. There's even a five piece orchestra! So please come along and see for yourself and you will have a great time, even if you have never had any connection with scouting.”