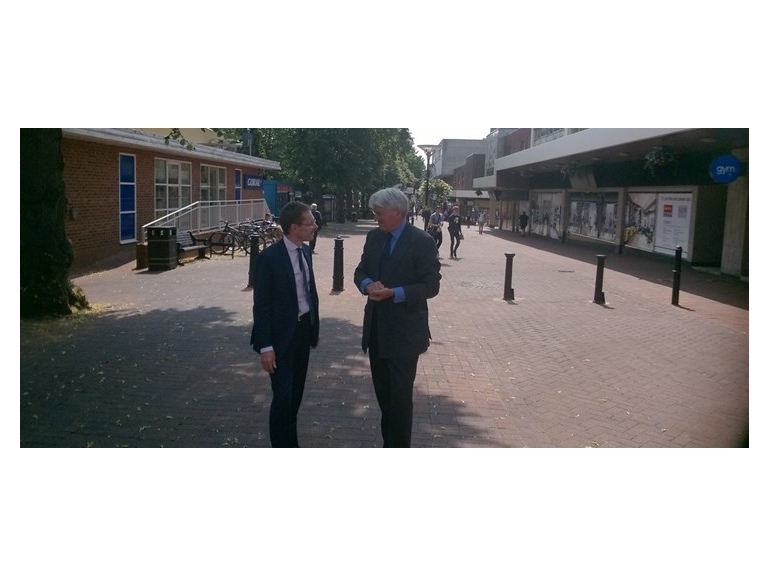 Sutton Coldfield MP Andrew Mitchell, West Midlands mayor Andy Street and local councillors are asking residents in the Royal Town to tell them what they want from their town centre – to help draw up a masterplan to reshape it.

The planned summer closure of Marks and Spencer has raised concerns over the future of the town centre, leading to a meeting between Mr Mitchell, Royal Sutton Coldfield Town Council and M&G Real Estate, owners of the Gracechurch Shopping Centre.

Now Mr Mitchell, Mr Street and Conservative councillors are set to launch a survey asking Sutton residents for their views on the town’s main shopping area.

“Every resident of Sutton will have an opportunity to contribute to the consultation that I’m doing with Andy Street around their views on the future of the town centre,” Mr Mitchell said.

Mr Street, a former boss of John Lewis, added: “Retail is changing and, in my opinion, for a town centre like Sutton we have got to think less about branches of national chain stores and more about what the local community really wants - and I believe that will be more about local services.

“Sutton Coldfield has already pioneered the idea of public services working alongside business – it’s great that the library is now run in this way. But we have got to think about what else local consumers really want there, and what would make them want to go into the town.”

“My constituents agree with me that Marks & Spencer vacating the Gracechurch Centre is a blow for the Royal Town,” he said.

“But my meeting with M&G Real Estate marked the start of something exciting which will address the structural difficulties faced by our town centre.

“It is now imperative that the work we are doing on the future of the town centre is led by the Royal Sutton Coldfield Town Council and that Birmingham City Council allow the Town Council to lead, while providing robust support.

“Andy Street’s support as our Regional Mayor, coupled with his immense experience in running John Lewis, is hugely advantageous for us too.”

Now both Mr Mitchell and Mr Street are backing the Town Council’s bid for a slice of cash from the Government’s High Street Futures Fund, which provides capital to put local ideas into action.

In a letter to James Brokenshire, Secretary of State for Housing, Communities & Local Government, Mr Street wrote: “For a thriving modern British town centre, I believe in the importance of strong local leadership, and I know that the community in Sutton Coldfield has come together behind this bid, both from the private and the public sector.

And in a sign of confidence in Sutton, M&G Real Estate has also enlisted architects Chapman Taylor –renowned for its work on London’s St Pancras International rail station – to draft conceptual plans for the future of the town centre.

The survey being organised by Mr Mitchell and Mr Street will be delivered to local addresses throughout the next few weeks.